One of the most popular DVDs I have done teaches 25 exercises that begin to teach some of the key internal strength skills you need for quality Tai Chi, Hsing-I or Bagua, particularly the two most important skills -- establishing and maintaining the ground path and peng jin.

Those two things must be present in every movement at all times -- it does not matter which style of Tai Chi, Hsing-I or Bagua you practice. Sadly, millions of internal arts students have not been taught these skills.

The exercises in the DVD, and on my membership website, require a partner. Some of my website members have asked how they can work the ground path and peng if they don't have a partner to push or pull on them.

I have created some videos that show the use of fitness bands. I bought a box of heavy duty Thera-Bands and cut off a strip, wrapped it around a post in my basement and tied a knot in it.

The ground path is a solid feeling between the ground under your feet, extending through the body up to the hand, the elbow, the shoulder, the ribcage -- anywhere you need it.

Peng jin is an expansive outward force that feels as if your body is pumped with air, preventing your limbs from caving in.

Both the ground path and peng jin are physical skills, not metaphysical, and they do not rely on some invisible energy ("chi") flowing through your body. These are body mechanics, a way of moving that helps you develop relaxed power. 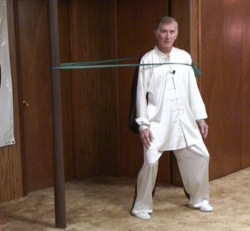 Connecting the "push" on the shoulder to the ground through my right leg. 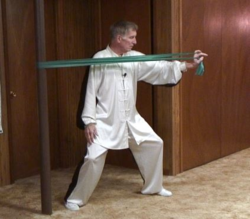 Connecting the "push" into the extended hand to the ground through my right foot.

The second exercise is to extend your hand forward (Photo 2) and your opponent pushes into the hand. You establish the ground connection from the hand to the rear foot. With the fitness bands, you stand so that the band is pressing into your hand and stretch it so that you can feel the "push" going from the hand to the foot.

Always remain relaxed through these exercises -- relax the legs, flex the knees, relax the lower back, and NEVER tense the arms. Use only the amount of muscular tension it takes to hold your arm up or to stand. 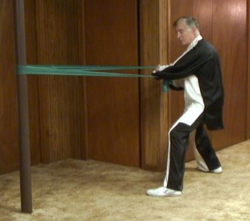 A "pull" on the front arm is grounded through the front (left) leg.

Another internal strength exercise teaches you how to ground a pull. When your partner pushes from the front, you ground the force to the rear leg. But when he pulls on your arm (Bottom Photo) you ground it with the front foot.

A pull from the front is grounded the same as if your partner pushed you from behind. You would ground it to the front leg.

If this is confusing, and you have not been taught these skills, I would recommend my internal strength DVD or you might consider trying out my website (you get two free weeks when you sign up and can cancel anytime). The video for these solo fitness band exercises is on the website but not yet on DVD. The Internal Strength DVD includes the concepts and partner exercises that help you begin developing real internal skill. Without these skills, your internal arts are empty.

Taiji Grappling and Taking Advantage of Your Opponent's Energy

Anyone who reads this blog regularly knows that it is a mistake to interpret the term "energy" in some mystical way. Energy can simply mean "force" when discussing the energy an opponent is directing at you.

Energy can also mean "method" to describe a way of dealing with the force your opponent is directing your way. In other words, Cai Jin (Pluck Energy) describes a method of plucking or jerking to put your opponent off-balance. There is no actual "energy" called Cai in your body.

Many Westerners are inclined to believe things literally -- Adam and Eve, ghosts and psychics, etc. -- and so mythology has developed around the energy of the internal arts. You don't gain skill by increasing chi, your "chi" increases as you work like hell, gain experience, insight, and develop skill as you do in any sport, any physical endeavor, any trade or profession.

I love the grappling skills associated with the body mechanics of Taiji -- how to feel my partner's energy and take advantage of it to put him on the ground. Push hands is one way to bridge the gap between form and self-defense, but as you work on your push hands, after you learn the patterns and applications, this is another step forward in the process.

A lot of fights end up in a clinch. The fighter who can read his opponent's energy (force) can often gain advantage, and Taiji is a close-up fighting art that requires you to sense an opponent's energy, neutralize it, redirect it and take advantage of the moment of vulnerability you have created.

These photos show one sequence as I practice with my friend and black sash student, Chris Miller. We clinch in Photo 1, then he steps in to try a one-leg trip/sweep in Photo 2. This is a common takedown in martial arts.

I maintain peng and the ground, and apply pressure to his left shoulder with my right hand in Photo 3. You can see his torso moving back. In the internal arts, you learn to take his energy where it wants to go. In Photo 3, I have caused his energy to begin moving back. Now, I want to help it go that way.

He has very poor support because he is standing on one leg during his sweep attempt, and as I maintain peng and the ground path into his right shoulder, he is in a vulnerable position and will have a hard time defending himself.

All I have to do is turn my waist (Photo 4), maintaining ground and moving the arms with the waist (Dan T'ien) and use my leg as leverage to keep his energy moving backward and take him down.

This is not something that requires a thousand hard takedowns in practice. In fact, the most important thing is recognizing and reading his intention to sweep you, maintaining good body mechanics, and being in position to take him down. We often practice it without mats, beginning the takedown but then helping to catch our partner before he hits the ground. With mats, you don't need to be so careful.

There are many techniques and energies to practice. This blog post only shows one. I recommend practicing each technique like this with a partner -- over and over -- to get the feel of it. That type of repeated practice allows you to internalize the feeling so that you know what to do when an opponent moves to take you down.

Try two weeks free on my website, Internal Fighting Arts, and get complete instant access to 700 video lessons, ebooks, and more that explore the internal arts, the movements, body mechanics, and fighting applications.