6 Reasons Why You Should Train with Traditional Martial Arts Weapons 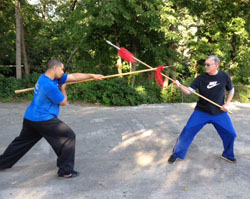 I saw a cool video today that I'm not putting up because of the profanity involved. Two men on a commuter train begin punching and kicking another man repeatedly as other people in the train car look on, afraid to help. Except for one bystander who happened to be carrying a samurai sword. This young guy pulled out his sword and held it above his head in a good Samurai pose, ready to strike. He moved toward the attackers. They ran away and got off the train.

Apparently a sword can be an intimidating weapon in modern times.

I have some instructional weapons videos on YouTube, including one video on the fighting applications of the straight sword. Occasionally, an anonymous idiot will flame the video with a comment such as "That sword would be useless against a 9mm." 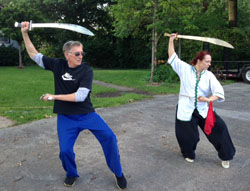 To an outside observer who has never studied traditional martial arts, I suppose it might seem a bit silly to practice with straight swords, broadswords, elk horn knives, and similar ancient weapons that were used in battle centuries before Mr. Smith and Mr. Wesson were gleams in their fathers' eyes. If your idea of fighting is MMA, it probably looks bizarre for someone to walk the circle and spin with elk horn knives. But there are several very good reasons we train with weapons. Here are six of them. Maybe you can add more.

1. Tradition -- Weapons such as these are part of the history of our arts. They were used in combat and to defend villages and families against bandits and other invaders. Peasant farmers could pick up an implement such as an axe or scythe, leading to the development of weapons such as the elk horn knives. One of the oldest known weapons was a spear, believed to be up to 300,000 years old, discovered in Ethiopia.

2. Deeper Insight into the Art -- It is one thing to learn how the five elements of Xingyi are translated in fist postures using empty hands, but learning how they are used with a sword or staff gives you a deeper look into the art. Walking the circle and doing palm changes with empty hands in Bagua is the essence of the art, but doing it with a broadsword or a staff gives you an entirely different perspective.

3. Conditioning -- Weapons such as the Kwan Dao provide the benefits of weight training while also working cardio. Traditionally, the Bagua broadsword was huge and heavy, giving you an excellent whole body workout. Staff and sword also require more strength than empty hands, and provide good upper body exercise. After I lost the function of my left lung in 2009, the additional work and cardio required for weapons forms was very obvious. It's good for you!

4. Coordination and Footwork -- Movements that require you to control a weapon can be complex, involving twirling, turning, and coiling. You develop subtlety as you learn to deflect the weapons of opponents and counter. When an opponent thrusts with a sword, it requires control to deflect just enough with your sword to cause his sword to miss while putting your sword in position to counter. Footwork must be quick, light and lively with weapons. And while you may always use a sword with your right hand (if you are right-handed), using weapons such as elk horn knives, double sticks or double swords helps you develop ambidextrous skill.

5. Practical Self-Defense -- If I am in a situation that calls for self-defense and I can pick up a stick or a broom, I will be grateful for every moment I've spent training with a sword, staff, or stick. You can bet your life on it. Training with a knife can help you anticipate the movements of an attacker who is armed with a knife, a situation that could happen in real life.

6. The Phrase is "Martial Art" -- Don't forget that the word "Art" is included in this phrase. Yes, we are learning to defend ourselves and the people we love. But let's be realistic. I am 61 and I have not been in a real fight since I was 18. If my luck continues, I will never be in another violent self-defense situation. Why would I obsess about it at this point? I learned to defend myself decades ago, and still practice those skills and techniques and principles today. But as I have gotten older, I have learned to appreciate the art a lot more than I did when I was in my Twenties. I appreciate the beauty of forms such as the Chen Straight Sword Form and the Bagua Elk Horn Knives Form, the grace and the bursts of power, and I enjoy the strength and power of the Xingyi Staff Form. I enjoy the precision required by these weapons, and how to cut with a sword so that the air makes very little sound as the blade makes its most efficient cut. I also love the fighting techniques.

Here are a couple of bonus reasons to practice traditional weapons. Weapons are cool. And they are fun. And isn't that why most of us got into martial arts? Sure, we started because we wanted to learn better self-defense, but also because we thought it was fun and cool. I've been practicing now for almost 41 years and I still think it's fun and cool.

Weapons training has many benefits, even if you never see anyone carrying a broadsword down the street. So what if the anonymous flamers on the Internet don't understand? Who cares if their idea of self-defense begins and ends with MMA?

I invite you to leave a comment with your reasons for training with traditional weapons.

Good prospective on why it is called an "Art." I've been spending more time working with the bo staff and have found it provides instant feedback when my balance is off. Thanks