Cheng Ting-hua, one of the most prominent early Bagua masters (he was a student of Bagua creator Dong Haichuan) taught eight stationary Bagua postures to students. They were put into a form called the Eight Basic Palms form, which is practiced while walking the circle. 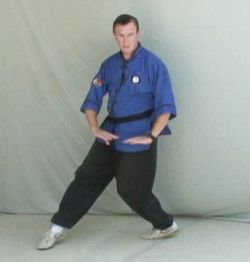 The first of the stationary postures is Fierce Tiger Emerges from Mountain. After the opening movement of the form, you walk the circle with your upper body turned toward the center of the circle and your palms downward, with fingertips of both hands pointing towards the other hand. Thumbs are angled downward.

The point of Fierce Tiger is to practice "downward" energy. The intent of the body -- the weight of the body -- is focused into the palms as they press downward. This press is not done with muscular tension, however. It is done by relaxing the shoulders, sinking the energy of the body (I often call this "sinking your weight" to avoid mystical interpretations) and putting your intent into the palms. 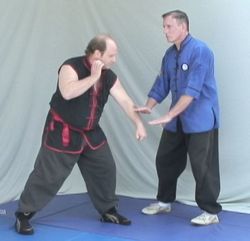 One of the self-defense applications for Fierce Tiger involves a low punch or kick to the stomach or groin. In the second photo, my friend Sean Ledig gives me a low punch. I put my weight into my hands and use the entire sinking of the body through the hands to knock down the punch. By dropping the body weight into the palms, it jolts his body off-balance and turns him slightly away, giving me the opportunity for a counter strike. Looking at the photo, the jolt of the redirection caused him to lean in, giving me an opening for an immediate elbow strike with my right arm to the left side of his face.

It is important to point out that both palms are not necessary in a fighting application. I can apply the energy from Fierce Tiger using only one palm, knocking down a low punch or kick while the other hand remains ready to counter or protect.

Fierce Tiger Emerges from Mountain is the first of eight stationary postures in the form. It is an important form that helps students practice circle walking along with the focusing of different energies with the palm postures. Complete instruction of the form and some of its fighting applications can be found on my Bagua Basic Skills DVD and on my Internal Fighting Arts website.

Some students rush through this form and, after they learn it they do not practice it often. I urge everyone to take their time. The circle walking builds leg strength and agility, and the holding of postures develops the ability to relax and use various "energies" of the palm postures. Breathe naturally, coordinate exhalations with "yang" movement, and focus on the martial intent and whole-body connection.

thanks for this information. i have one of your dvds and i try but i don't always understand what im doing.

Cory, you should join my website. Then we could do some one-on-one coaching sessions through Skype or Facetime. Check it out at www.internalfightingarts.com.