Home Archives Profile Subscribe
Tolkein Captures the Essence of the Aging Warrior
It's Coming -- March 21, 2014 -- for Students of Taiji, Xingyi, Bagua, and Qigong 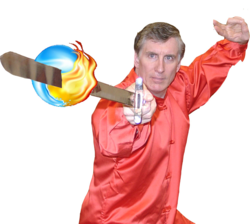 Some people think it's useless to train in martial arts weapons such as the straight sword because we no longer have swordfights on the street.

I believe training with weapons is important to train body mechanics, coordination, and the ability to transmit internal power through the weapon. The same techniques that make a straight sword useful can also be used if you are attacked and can pick up a stick.

And, of course, weapons are cool, and isn't that one of the reasons we began studying in the first place? One of the coolest parts of Enter the Dragon was when Bruce Lee whipped out different weapons. His nunchaku action was a crowd favorite. I saw that movie in 1973 and spent a lot of time practicing nunchaku moves.

The straight sword, known in Chinese arts as the "Jian," is considered the "master's" weapon because of the skill it requires. In traditional Asian arts, the straight sword was considered a sacred object, possessing its own spirit, and treated with the highest respect. It was often placed on a shrine in the home.

Even today, sword etiquette should be observed at all times by serious students. 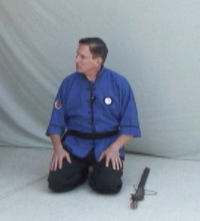 When sitting in a hostile environment, it is best to keep your sword at your left side with the pommel facing toward the front. This gives you the chance to draw the sword with your right hand if the situation deteriorates.

If you are in a friendly environment, place the sword on the right hip or on the floor next to where you are kneeling. In this position, you are not able to draw as quickly. It is a signal that you consider yourself among friends.

When presenting the sword, if for some reason you do not trust the person you and presenting it to, keep the grip on the right side, giving you the chance to draw the sword if needed. 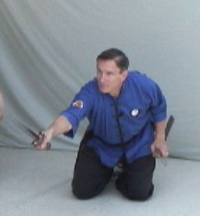 When you are presenting the sword to someone you trust, hand it to them with the grip on your left side. This shows respect, and in theory gives the person receiving the sword the ability to draw it with their right hand.

I have to admit that my students and I have had some fun with this over the years. In tournament competitions, when I am using the straight sword, judges have a tendency to ask for the weapon to examine it before you do your form. I am always interested in how they present it back to me.

Usually, nobody has a clue about sword etiquette. 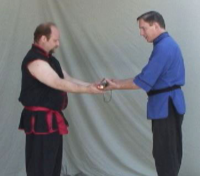 There are also times - as I am waiting to compete - I will kneel with my sword at my left side with the pommel facing forward, indicating I am in a hostile environment. Only my students and I know this, and we have had a few chuckles over the years.

I believe that you should learn to fight with a weapon if you are going to learn a weapons form. That's why my website has fighting applications for all the weapons I teach, and why I include fighting actions for movements in each form I put on DVD, including the Hsing-I Straight Sword Form, the Hsing-I Staff Form, the Chen Taiji Straight Sword Form, the Chen Broadsword Form, and the Bagua Elk Horn Knives. I haven't yet videotaped Chen Spear fighting 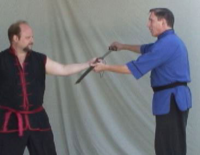 applications but that is coming soon.

Weapons are important, both as part of the internal arts' rich history, and as part of your personal development as a martial artist. And you never know when the parries and deflections, strikes, and other techniques will be useful in self-defense with a stick, broom handle, or similar object.

Thanks to my friend Sean Ledig, who appeared in these photos back in 2008.