Qigong - Chi Kung - and the Eight Pieces of Brocade

It’s impossible to trace the origin of many chi kung exercises. The Chinese people have a military history that dates back thousands of years, and the value of exercise and stretching were probably recognized very early as being beneficial for the success of battlefield troops. 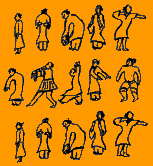 The images at left – and below – were found in the tomb of King Ma, who lived before Christ, died in 103 BC and was buried with many documents, including military training manuals. The documents were discovered when his tomb was found in 1973. Some of the images are very similar to chi kung exercises, including movements from the Eight Pieces of Brocade.

I first learned the Brocade exercises as chi kung, but the more I practiced, the more I came to believe that these were also used as stretching and leg conditioning exercises for Chinese soldiers. It is possible that the chi kung interpretation was added many centuries later.

The Eight Pieces of Brocade is not a mystical or magical routine. Practicing the exercises will not give you special powers. You will gain benefits from the stretching and the leg strength that comes as a benefit from the horse stances, but the main purpose of these exercises is the purpose of all chi kung – calm the mind and body, ease stress, center yourself, and allow your body to become the healing machine that it truly is.

Your goal in all chi kung practice is to recapture the centered and calm feeling when you encounter moments of crisis or tension in “the real world.” I have used this for more than two decades in all types of tense moments, from work to home relationships and even in traffic on city streets and Interstate highways. It can help you ride the ups and downs of life without being capsized. 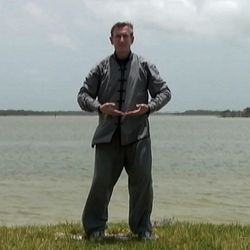 Here is one of the exercises from the Eight Pieces of Brocade. Begin by standing with your feet shoulder-width apart and your hands in front of you -- palms up and fingertips nearly touching.

Inhale while you are in the first position, then exhale and push one hand up and the other hand down. Put "supporting" energy into the upward hand and "downward" energy in the lower hand.

Exhale as you return the hands to the original position and then reverse hands -- the other one goes upward and the other down. Exhale as you 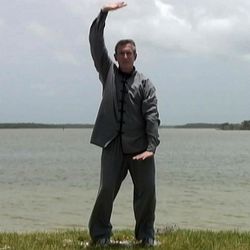 are doing this. Then inhale as your hands return to the original position.

The key is calming your mind and body. You want to be as relaxed as possible through the exercise, although you do want to use supporting and down energy in the hands.

The entire Eight Pieces of Brocade is part of 90 minutes of instruction on my Qigong DVD. The cost of the DVD is $19.99 with free shipping anywhere in the world. It also includes three 5-minute routines, two 10-minute routines, and 36 exercises of the Yi Jing Ching (the Fist Set, the Palm Set, and the Moving Set). All the exercises are described and shown in my Qigong Kindle ebook available on Amazon's Kindle Store worldwide. The ebook costs only $4.99.

Qigong will not make you immortal. After all, every qigong master of the past is dead. But it does help you balance the mind and body, and it can improve your health by managing stress. It is not difficult, but it takes time and practice. It is well worth the effort.

Chen Man Ching -- the Birth and the Marketing of Tai Chi Chuan in the U.S. 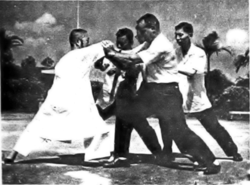 Chen Man Ching demonstrates rooting, probably in the 1930 or 40's.

Chen Man Ching was one of the first notable people to bring Tai Chi to America. He was born in 1902, studied some Tai Chi before meeting and becoming a student of Yang Chengfu, historically known as the most famous early teacher of Yang Tai Chi. Chen studied with Yang Chengfu for six years.

By 1946, Chen Man Ching had developed his own short version (37 movements) of Yang Chengfu's long Tai Chi form. He performs it in the video below.

He moved to New York City in 1964, no doubt causing quite a stir since Tai Chi was mysterious at the time. In 1967, he teamed with Robert W. Smith and T.T. Liang to write a book about Tai Chi. He died in 1975, but by that time, as Tai Chi teachers are bound to do, he became a legend.

I am grateful that he was a pioneer who helped to bring the internal arts to America. When I watch video of him performing, or one of his more famous students, William C.C. Chen, I am always disappointed. I see a version of Tai Chi that is much more appropriate for older people than for martial art purposes. However, considering the lack of Tai Chi instructors in the U.S. in 1964, he was considered to be the best in America at the time.

Perhaps this is a reason why, after studying Yang Tai Chi for over a decade (and winning a gold medal in the 1990 AAU Kung Fu Nationals doing the Yang 24 Form), I switched to Chen style within an hour of meeting my first Chen style teachers. It was more alive and the relaxed body mechanics could deliver power. From being involved in sports, and now experiencing the body mechanics of Chen Tai Chi, I knew that what I had been studying was empty.

But we all know how students can inflate a legend. Before I studied with my first teacher, Sin The of Lexington, Kentucky, I heard stories from his students who said he could jump up and kick a basketball goal (pretty impressive in Wildcat country) and he could cut himself and control his bleeding. None of it was true (not even his Shaolin background).

In Tai Chi and other martial arts, the truths of marketing are true just as in any industry. You don't have to be the best as long as you are the first in the market. That's why, when you ask people if they know about Tai Chi, those who do will usually say, "That's a slow motion health exercise for the elderly."

Coke was the first major soft drink. In parts of the country, when you walk into a store, whether they serve Coke or Pepsi, you say, "Give me a Coke." That's why Pepsi started demanding that their restaurants and fast food joints say, "Is Pepsi okay?" Decades after Pepsi beat Coke in taste tests (people think Pepsi tastes better) Coke still beats Pepsi in sales.

It is better to be first than it is to be best, even in Tai Chi. Here is a video of Chen Man Ching performing his 37-movement form. We owe him a tip of the hat for making Tai Chi well known in the United States. But we know more about Taijiquan than we did in the Sixties and early Seventies. We have moved deeper than the health level and have seen the martial art. And it is a good one.

If you practice Yang style and would like to see 108 self-defense applications that are hidden in the Yang 24 Form, this Kindle ebook shows you all of them and explains them in detail. Read more about it on Amazon. If you are not in the U.S. and reading this, visit your own country's Amazon Kindle Store. 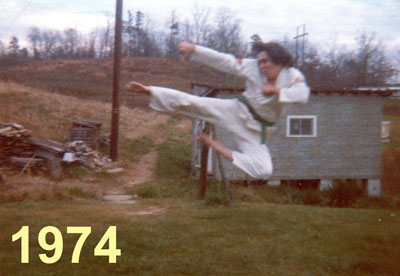 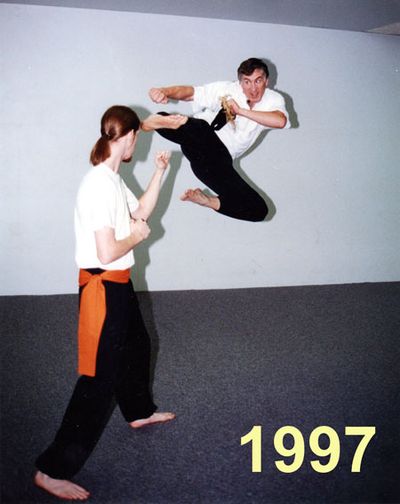 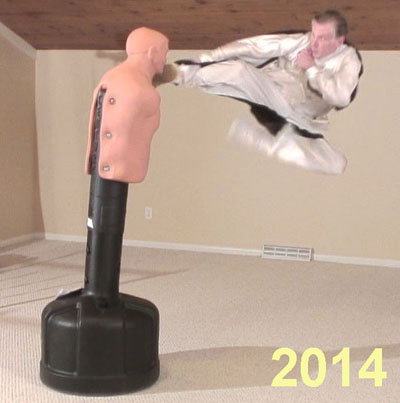