How Do You Find Inner Peace? A Story of Qigong and the Journey Within and Without 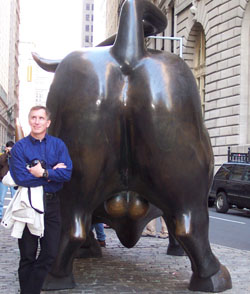 My favorite poem comes from a book I bought back in the Seventies, Man of Contrasts, by taekwondo master He Il Cho. Here is the poem:

I can find peace amidst the city's roar

In the dry, frayed face of confusion

My peace is cradled within.

Where does peace come from? I started finding the answer to that question when I began practicing Qigong in 1987, about 14 years after I began studying martial arts and reading about Taoism and Zen Buddhism. Qigong (also spelled Chi Kung) took it to another level. Before long, the ability to center myself in tense situations or moments of crisis began to develop somewhere inside me, and it was noticed, both by me and by others.

Around 1988, when a wall cloud was passing outside the newsroom where I was preparing the 6:00 News (I was the producer), people were racing and shouting in the newsroom, wheeling cameras outside to broadcast it live. I was trying to write some final teases and copy for the 6:00 News. It was total chaos.

Suddenly, I heard someone laugh. I looked over and a sports reporter was laughing at me. "What?" I asked.

"Dr. Chill," he said, pointing at me. "Everyone is going crazy and you're just taking care of business."

At that moment I realized that I had centered myself and had become the calm in the center of the storm. It felt good, and I had done it intentionally after many months of practice, and now it came naturally.

More than a decade later, I found myself in New York City for a conference. I had been wondering if I would be irritated by the crowds on the sidewalks.

As a rubber-necking tourist from the Midwest, I must have walked 20 miles in two days. Making my way through the crowded sidewalks, the poem from Man of Contrasts went through my mind.

I can find peace amidst the city's roar.

I found myself rising emotionally above the crowds of people rushing in both directions on the sidewalk, but even as I relaxed and rose above it, I felt part of it, and watched people with great interest and good will, even when they brushed me as they passed. I heard everything and felt connected to everyone and everything. It was a feeling of peace -- becoming one with strangers and with this amazing, loud, hustling city.

It was one of the most wonderful feelings I had ever experienced.

By practicing Qigong and learning to calm and center yourself, then recapturing that feeling in moments of stress, you can open a door to a better place -- a healthier place, where you control stress and do not let it control you.

This does not mean you never get angry. You do. It does not mean you don't stand up to injustice, bigotry or stupid, destructive people. You can, and you should. It does not mean you will not fight. You will fight to protect yourself, those you love, and those who cannot protect themselves. You may get sad, you may be hurt, but the inner gyroscope will eventually lead you back to center.

But you do not let anger control you. You do not give stress a home. All natural emotions are allowed. When they happen, you seek to find your center. When you find it, the emotions do not linger. But you do not deny them or suppress them. That only gives negativity more power. Expect the unexpected and you will be ready to handle it. It is not easy, and it does take work.

Leaving New York City, a cab driver took me to the airport. I asked where he was from. He talked about Ethiopia. I asked about his country and if he missed his family. He had just visited them for a month. He and I became friends on the way to the airport, and when I got out and handed him his tip, he shook my hand and said, "You are a nice guy."

I wondered how many people he transported every day who showed no interest in connecting with him. He was a wonderful man who loved his family and was working hard. I helped him to smile on a busy, hectic day. As I turned to enter the terminal, it felt as if I had left my mark in New York City, and it felt very good.

Since that trip to New York, my internal gyroscope has seen me through job losses, near-death health disasters, and the typical ups and downs of life. It means a lot more than just handling the roar of a big city. Life has a lot of twists and turns, and the older you get, the harder it gets. I am now 60 and facing a much shorter life expectancy because of a weakening heart and the loss of one lung. But I've rarely been happier and more content with my life. When the end comes, I want to see my children and my wife's face, and I think I'll be smiling.

The quest for peace is universal -- peace on earth, good will toward men. But you do not have to look very far for this, and you do not have to look outside yourself. You do not need to depend on other beings -- spouses, bosses, or invisible beings -- to give it to you. The farther outside yourself you look, the farther away you get. It is right there, cradled within you, ready for you to find it.

Great article! Finding peace amidst raging storms is one of the key skills of life. You wrote about it well!