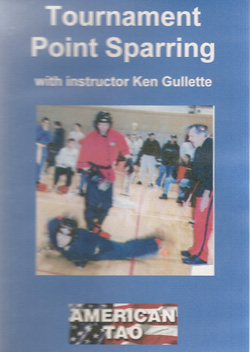 The first DVD I made was instruction on Martial Arts Tournament Point Sparring. For some reason, it was not on this blog until today (you can find it on the right side of the page in the DVD and Ebook section).

I've always believed in being a complete fighter, and that helped me win dozens of martial arts tournament competitions between 1974 and 2006. I also trained students who won dozens of competitions. By using this DVD as a training tool, you can improve your strategies and techniques.

Tournament point sparring might not be the same as real fighting, but the skills required to win are some of the same skills you need on the street:

1. The ability to remain cool under pressure

2. The ability to read an opponent quickly

3. The ability to take misdirect and take advantage of your opponent's weaknesses.

Whether you are into kung-fu sparring, karate sparring, or taekwondo sparring, you'll get something out of this instruction. As I got older, I enjoyed the competition and it forced me to stay in top condition. Any type of sparring is extremely demanding physically. It's also a lot of fun.

As an internal artist, a lot of fellow tai chi folks scoff at tournament sparring, but that never bothered me. There are a lot of good reasons to put it on the line before a jury of your peers. Tournaments are not always run fairly. Sometimes it can get political, when judges score people from their styles higher, but after a time or two you just stop supporting that particular tournament. Most of the time, people do the best they can to be friendly and fair.

You can learn a lot about yourself at tournaments. How do you respond when people are watching (in forms or sparring)? How do you respond when a trained martial artist is trying to punch and kick you. It's not just a game of tag. People get injured in every tournament I attend. You can learn about your own weaknesses, your mental strength, and your ability to deal with defeat.

I made a lot of friends at tournaments, too.

This DVD runs an hour, and I demonstrate techniques with my friend Hector Lareau, then I show actual tournament video that we taped over the years showing the techniques being used in real action. Most of the video was shot between 1998 and 2003.

The clip below shows a couple of strategies to use against kickers. If, after watching the clip you are interested in learning more, click this link to go to the DVD page and order.