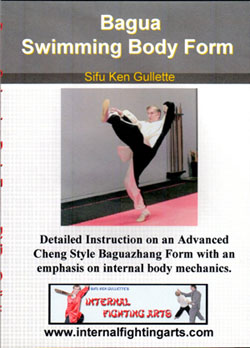 It seems as if we've been working on the Bagua Swimming Body Form DVD for two months. The DVD is finally done and all the video is also on my online resource for members.

The Bagua Swimming Body Form DVD includes 90 minutes of detailed instruction on this advanced Cheng Style Baguazhang form. It includes demonstrations of the form in normal and slow motion with names of each movement. Also, you can learn in a school environment by watching and practicing as I teach a student who is new to the form. Colin Frye is the student in the video who is learning the form. This style of teaching helps show viewers some of the mistakes that are made and they learn as I drive home details on camera.

The Swimming Body form is smooth and connected, flowing from one movement to the next. Most of the time, you are walking the circle. As usual, I emphasize internal body mechanics on the DVD. This DVD is devoted mostly to the form instruction. A future DVD will explore the fighting applications for these movements.

Check out the video below to get a sample of some of the instruction on the DVD.

When Is A Punch Not A Punch? Hidden Hand Punch in Chen Tai Chi

I am fascinated by the self-defense applications of Chen Taijiquan. There are no transitions, no "wind-ups" to self-defense techniques. Every action in a Tai Chi form is a fighting technique.

The photos here show the first appearance of the movement "Hidden Hand Punch" in the Chen 19 form -- the short form created by Chen Xiaowang. This is only one application that is possible (others are shown on the ebook and my Chen 19 DVD).

In Photo 1, my opponent is punching and I am in the position at the end of "Flash the Back." I want to be clear - this is only for a visual reference if you know the form. In reality, all these movements are separate techniques -- not intended to follow each other. Forms help you practice the body mechanics for the martial art.

In Photo 2, I intercept the punch, deflect it and grab his wrist as I step in. My goal here is to get close.

Photo 3 shows me leading his punching hand forward with my right hand as I blend with his movement and get very close to him. I pin his arm to my chest as I continue to turn from left to right. I reach around and take hold of his chin with my left hand. He begins to go off-balance.

In Photo 4, I have taken control of his center, leading him off-balance as I continue to turn -- turning him along with me. I have become part of him, up against his shoulder and turning with him.

In Photo 5, I continue to spin him off-balance. Before he can recover, I pull his chin back to the left in Photo 6. We practice this gently because it is a neck break and you can injure your partner so we don't exert real force and you shouldn't, either. The important thing in practicing these is developing the correct timing, mechanics, and ability to control his center.

This movement does not have to be a neck break. As you can see in Photo 4, I could turn him over my leg and try to put him on the ground. And in Photo 7, instead of a neck break, I have grabbed the back of his collar as I spin him around. Then I pull on the back of the collar.

My left hand, the one that grabs his chin or collar, is the one that goes violently to the left side during the punch. It can also be used as an elbow strike to an opponent behind me. What I've shown you here is an application that leads my opponent, melds with his center, takes him off-balance in one direction and then quickly switches directions on him.

You can't do this from a distance. You must get up close and personal.

Photo 7 shows the punch as a visual reference again (this photo was taken from an angle behind me compared with the previous photos). If I am defending against a person who intends to kill me, and I break his neck in this way, I won't be punching into empty air. The neck break is one application, but this illustrates what point in the movement the pulling to the left happens, whether you are pulling the chin or the back of a collar.

There are other applications -- of this movement and the rest of the form -- in the ebook and the DVDs on the Chen 19, Chen 38, and Laojia Yilu. I just love this aspect of the art. Maintain your mental and physical balance as your opponent loses his. Connect with your opponent. Control his center. Be One with your opponent. All of this information can be found in the form if you study each movement carefully.

Should Martial Arts Students Just Be Quiet and Do What They are Told? 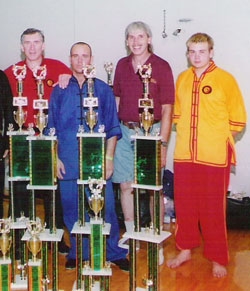 Some hardware won with two of my first students in 1999. From left to right: me, Rich Coulter, tournament promoter Frank Pennington, and Chad Steinke.
There was an interesting comment online last week. An internal martial artist (I'm not sure if he is a teacher or not) said that when students begin studying, they should not ask questions. They should understand that they do not know enough to ask questions. Instead, they should do what their teacher tells them to do, over and over until they progress for a while.

He said that ego makes us think we need to know more than our teacher is telling us, and we need to "let it go" and follow. Just follow, and all things will become clear in time.

I could not disagree more.

I first began teaching at a small fitness center in Iowa. Rich Coulter and Chad Steinke were among my first students. They were both teenagers at the time, and when they walked in, they sized me up like hired guns. It was my first week as a teacher -- October, 1997.

As I showed both of them basic techniques that I taught at the time -- corkscrew punch, sunfist punch, front snap kick, roundhouse kick, etc. -- they would ask questions. Sometimes, their questions surprised me. There were a couple of moments when I must have had a "deer in the headlights" look in my eyes.

It was not long before I realized that being a "black sash" and a teacher was a new ballgame for me. If these young guys were going to follow me, I had to know more, and suddenly, I felt the need to be perfect.

Their questions pushed me to study harder, practice more, and do research. As I did, I found gaping holes in my internal arts curriculum. I studied material by good martial artists like Mike Patterson and internal concepts from people like Mike Sigman. I added material to my curriculum. Within a few months, I started studying Chen Taiji with Jim and Angela Criscimagna. Because of my students questions, I realized that I was missing something. My students didn't realize it, but I did, and I became a better martial artist. I began incorporating the body mechanics that I learned in Chen Taiji into my Hsing-I and Bagua.

Sorry. I don't buy it. And my best teachers asked questions of their teachers. As Americans, they wanted to get under the hood and see how it worked. I was lucky they did.

I wish I had questioned my teachers more deeply when I began studying with a couple of people who claimed to be masters but invented a lot of their backgrounds. I wish I had looked at them through more realistic and critical eyes, but instead I did not question when I should have questioned. It cost me a lot of time and money. I learned some things of value, but under false pretenses.

This "no questions asked" philosophy might work in some cultures. Don't question the father figure. Just do what he says. But that doesn't work in the United States. We have a different culture here. Explain to me why I'm doing this. What are the body mechanics for this movement and what is the application? This is the way I want to be taught, and it's the approach I take in all of my teaching materials -- videos, DVDs, ebooks, online, and in-person.

I think good, confident teachers encourage questions. Even Chen Xiaowang will teach for an hour and then gather students around. "Questions?" he asks. "No worries." Then you can ask questions.

Of course, the idea of working hard and following your teachers instruction is a good one. It's something that you have to do as a student. And it takes a long time to learn these arts. Years of study and practice just to get to a mediocre level. But you should be able to ask questions and get clear answers, not just about the movements, techniques and principles you are studying, but also about the teacher.

If you encounter a teacher who doesn't like questions or who evades the answers, find another teacher. By the way, Rich and Chad became very good friends over the years -- much more than students.

I was a teenager in the Sixties and early Seventies. We had a saying back then: Question Authority.

I still believe it is a very important thing to do, even in martial arts.