Tai Chi, Bagua and Hsing-I - The Difference Between Fighting and Art 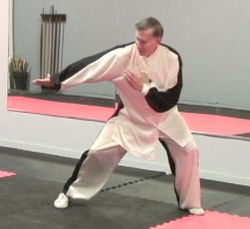 I received an interesting email from a website member in the United Kingdom. It started as a discussion about Hsing-I and the relationship of the Five Fist Postures to the 12 Animals. It went on from there to discuss the evolution of fighting movements into art.

In our 21st Century, MMA-obsessed culture, traditional arts are often criticized or brushed off as ineffective. That's pure B.S. of course, another one of those "my style is better than your style" type of arguments.

These are called martial "arts" for a reason. The styles that I study are internal martial "arts." The movements in Hsing-I, Tai Chi and Bagua can be used for fighting, but the word "art" is part of the name. Over the past 40 years of practicing, the reason has become more clear to me. 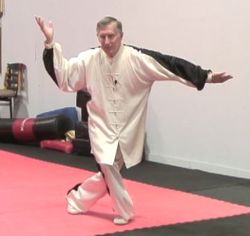 You don't have to perform the movement artfully in order to pull off some fighting moves. The self-defense applications can be practiced without looking real good. In fact, applications are never as "pretty" as a form.

But to do the movement well in a form requires a flowing, connected energy from the ground, spiraling through the body, turned by the Dan T'ien and flowing through the legs, body, shoulders, elbows and hands. How well am I using silk-reeling through the body? How well am I connecting the ground with whole-body movement? Am I spiraling from the leg through the body, shoulders, elbows and hands in a flowing, connected way? Learning and practicing the body mechanics to do the movement in a beautiful, connected way is the art. It also makes your application more powerful. Building skill takes hard work and time (the very definition of "Kung-Fu"). It also takes time to learn the self-defense applications well, but you don't have to look good to do that. You just have to be effective. 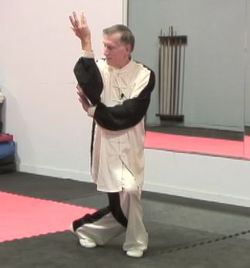 I was watching a video online of the founder of Aikido. It reminded me how unrealistic a lot of fighting applications are when they are dependent on students who are playing along. Demonstrating these movements helps explain concepts, but where we go astray is when we think that even what O'Sensei (or any teacher) uses in a demonstration is effective against a motivated adult who is attacking you to do violence. A lot of fights can be ended with one good punch. The simplest techniques are often the best. But concepts such as  the sphere of power or the capturing of an opponent's center are important and must be shown.

In my own videos, I try to make the applications realistic. I'll admit when an application would be difficult to use in a real fight, but I will teach it if the concept is solid. Sometimes, an application is more "art" than fighting. It's okay as long as you understand that. There are some Bagua videos that I see where a student punches and the teacher deflects the punch, snakes his arm around the student's neck, and then gets him into a choke or a throwing position with very little reality-based response from the student. Naturally, they're not going to make it difficult for the teacher as a real opponent will. But the video is useful in showing you concepts of the art.

For those of us who have been in real fights, we know that some of these moves are extremely difficult against a motivated adult. At the very least, you would have to soften them up with other techniques (punches, knees, elbows, kicks) to employ the element of surprise in pulling off the more complex movements. So you have to keep this in mind when watching movements and demonstrations of fighting applications. In fact, at your next practice you should put on some pads and tell your partner not to play along. Then try to do some of the more complex moves of your art. I guarantee a big difference if your partner is not cooperating.

I never expect to be in another real fight. I am prepared if that happens, but over time, your focus shifts. When I began studying in 1973, I wanted to learn self-defense and philosophy. As I learned self-defense, my confidence grew. Now, I love to improve my internal mechanics to smooth out my movements so they flow with relaxed power. It involves self-discipline and self-mastery, the same benefits you receive when you excel at anything, from gymnastics to basketball, from golf to being really good at your job. Those who do anything well are artists. They have "kung-fu."

A painting that is low quality to the eye of an art critic can go very well with a room's decor, and if you don't know what good art is, it might seem great to you. Remember the black velvet Elvis and the dogs playing poker?

An internal technique done poorly can still be effective in self-defense. But the skill of the painter in the brush strokes, the application of color and capturing the message he intends to convey -- that is the art, just as the connected, coordinated, flowing strength, and fajing of Bagua, Tai Chi and Hsing-I movements represent a more complete expression of skill.

Try two weeks of my website free and get access to over 600 video lessons, ebooks, and a private discussion board. Click the link to learn more.