Home Archives Profile Subscribe
The Eight Energies of Tai Chi -- One of the Meanings of Press Energy in Tai Chi and Bagua
Tai Chi, Bagua and Hsing-I - The Difference Between Fighting and Art 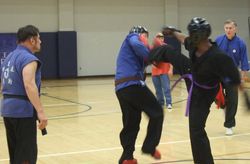 John Morrow on the left with Ken Gullette on the right, judging a sparring match at Morrow's tournament on Oct. 12, 2013.
I was a judge at John Morrow's 40th Semi-Annual Karate & Kung-Fu Tournament last Saturday, held on the campus of St. Ambrose University in Davenport, Iowa.

John always puts on one of the best tournaments in the area, drawing mostly friendly martial artists who are fair in their judging and talented in their technique. But over the years, the tournament has shrunk in size.

If any of you were involved in martial arts back in the 1970s, you remember how the stands were packed with spectators and there were hundreds of competitors, including kids, adults, men and women -- the Bruce Lee craze fueled the flames and there were martial arts schools on every corner, it seemed.

Even in the 1990s and around 2000, the tournament scene was thriving. I was in the black belt competitions at Morrow's tournaments and others in Chicago, Keokuk, and Dubuque. Sometimes 15 or 20 black belts -- men, women and seniors -- would compete in forms and sparring. On Saturday, only one young black belt showed up to compete. The rest of the competitors were under black belt. Several prominent local teachers who have their own schools didn't support the tournament and didn't send students, or attend to help judge the events. I'm very disappointed in them.

It's easy for people to dismiss tournaments. Even some martial artists look down their noses and complain that "it isn't real." The sparring matches are "low contact." They are supposed to be "no contact" but that's virtually impossible. If someone isn't hurt, judges generally allow it. I've always loved tournaments. You train for it, practice your forms and techniques, then put it on the line in front of a jury of your peers and mentors.

You can learn a lot about yourself in tournaments. How do you respond to pressure? Can you detach from the eyes staring at you and perform with precision and power? In sparring, can you size up the weaknesses of your opponent and score? Do you freeze up?

I still think this is one of the greatest sports, and find it hard to believe more teens and adults don't take it up. The skills you learn are not only helpful in self-defense, they build confidence, which carries over into all areas of life.

In the old days, a school owner could earn a living with a school. Now, a lot of martial arts school owners have full-time jobs to supplement their income. Children are involved in several activities throughout the year but martial arts isn't usually one of them. Young adults seem to be involved in other things. Adults 35 and over think they are too old (they're not). MMA has drawn some young guys who think they want more realism, but the truth is that when these young guys see how difficult it is, and how hard you have to work, they drop out of MMA, too.

Some outstanding traditional arts are being taught. You can learn without worrying about getting a concussion. You can learn self confidence, get in shape, and learn to control your mind and body in ways that will surprise you. And you can learn to defend yourself and the people you love. That's an ability that is always good to have tucked inside in case you need it.

I started for self-defense and philosophy. After I learned self-defense, I became interested in developing my skill. I am particularly interested in how beautiful movements can be powerful fighting techniques. Arts such as Tai Chi and Bagua just get deeper the more you study them. They are arts that keep on giving.

There have been many changes in society and technology during the past 40 years. In 1973, Kung-Fu and Karate were mysterious and amazing. It was all so new. In 2013, even 20 and 30-year-olds have never known a world where martial arts schools were not around. It is no longer something cool and new. It's nothing special. Except to those of us who remember just how new and cool it was. For us, it's still cool.

I would love to see comments on this topic. Do you still study? Why do you study and what do you get out of it? If you don't study in a school, why not?