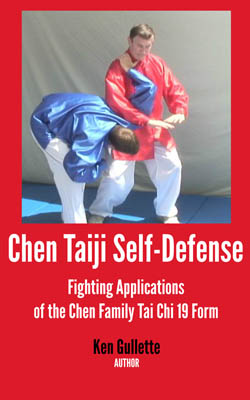 I have written an ebook with 239 photos and detailed instruction for 106 self-defense applications that are found in the short Chen Taiji 19 Form. The ebook is titled Chen Taiji Self-Defense - Fighting Applications from the Chen Family Tai Chi 19 Form. It is available on the Amazon Kindle store for $4.99 and will play on any device with the free Kindle app installed.

The Chen 19 Form was designed by Chen Xiaowang in 1995. He was asked by students around the world for a shorter form to fit into their busy daily lives. Also, in my opinion, I believe he wanted to provide a Chen family answer to the Simplified Yang 24 Form that has become the most popular Tai Chi form in the world.

The Chen 19 Form takes about 5 to 6 minutes to perform if done slowly -- less time if you do it with power and speed. It is based primarily on the longer form, Laojia Yilu. Movements are a bit conservative, with less obvious silk-reeling, than the Chen 38 or Xinjia forms. This is the first form that I teach new Taiji students. I have practiced the 19 Form since 1998, when I learned it from my teachers Jim and Angela Criscimagna, from

Grandmaster Chen Xiaowang (who Jim and Angela hosted for workshops) and later I practiced it with another of my teachers, Mark Wasson.

Tai Chi (also spelled Taiji) is a martial art. When you understand how the movements are used in self-defense, you will better understand the true intent of each movement.

This is the second volume in my two-volume series on the Chen 19 Form. The first volume, Chen Taijiquan 19 Form, is a step-by-step instructional guide with virtually frame-by-frame photos of the movements (more than 200 photos). In 2008, I produced a DVD with instruction and self-defense applications for the Chen 19 Form. 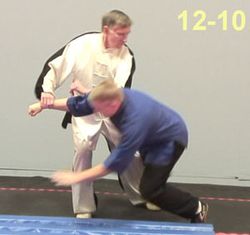 The movements in the Chen 19 form can also be found in other Tai Chi forms regardless of which style you study. They might be performed in slightly different ways from a stylistic perspective, but they all originated in Chen Taiji -- movements such as the Opening of the Form, Wave Hands Like Clouds, Step Back Whirling Arms, Stepping Three Steps, and other movements.

One of my favorite applications from "Wave Hands Like Clouds" is shown here in two photos. Your opponent punches and you sweep his leg out from under him as you pull his arms across. This is an example of "Split" energy and it is one of the applications for the part of Wave Hands that involves stepping to the left as the arms sweep across your body.

Several years ago, I did a 3-volume DVD set on fighting applications of Laojia Yilu. There are more than 400 self-defense applications demonstrated on the DVDs. Even then, I didn't cover them all. With demonstrations and coaching for 106 movements in the Chen 19 Form, I hope this encourages students of Taiji to experiment on their own and use creativity and body mechanics to explore even more as you learn this amazing art.

Follow this link to see the ebook on Amazon.