The Implied Kicks in Xingyi, Taiji, and Bagua - A Double Kick from Xingyi's Monkey 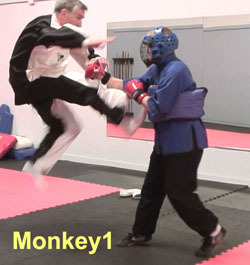 The internal arts are known for being a bit more "grounded" that some martial arts. I think first of Taekwondo, where folks leave themselves vulnerable when they do high kicks.

The kicks in Xingyi, Taiji and Bagua are not as high generally as some other arts, but they are there in every movement that involves a raised heel, a false stance ("cat stance"), and a lifted knee. Sometimes the kick is obviously a kick, sometimes it is not.

I just finished a DVD on one of my favorite forms -- Shi Er Xing ("12 Shapes") -- the advanced 12-animal form that I practice and have used in competition (and plan to do so again). 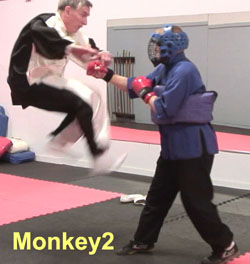 In this form, several kicks are used, but in the final section of the form, involving Monkey, there is a jump -- inside that jump, two fast kicks are hiding.

In Photo 1, my opponent has come forward and I launch the first kick, leaping from the left leg and kicking with the right.

127 fighting applications from the form are demonstrated and discussed on the Shi Er Xing DVD, all with an emphasis on body mechanics. 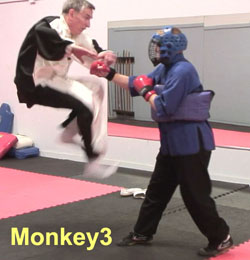 In a real fighting situation, if I kick, there is one particular kick that I enjoy - it is about solar plexus level and involves scooting but it is very powerful, a real fight-ender. And I also would prefer to remain grounded.

But I remember back to 1973 -- forty years ago -- when I learned my first 10 sparring techniques from my first teacher, Sin The, in Lexington, Kentucky. Sparring technique number 10 involved a surprise move as the opponent attacked, and even though I stopped doing it later, I never saw it fail to work. 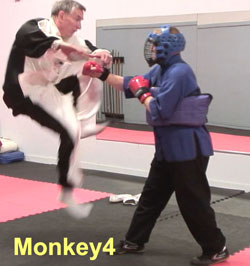 When the opponent attacks, you leap into the air and scream. One hand is held at rib-level for protection and the other hand is straight up in the air. As your opponent cringes, you drop and bring the uplifted hand down on his big ol' head. It is an effective technique.

The double kick described and shown in this post is common in several martial arts. In one style I studied, it was called a Butterfly kick. It involves straight kicks, not crescent kicks or side kicks.

Whenever you do Tai Chi, Hsing-I or Bagua, look at the position of your legs. Very often, even 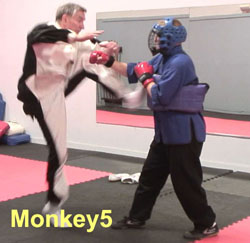 during stepping, there are kicks and sweeps hidden in the movements. I try to uncover these in my various videos on my membership site and in my DVDs, but they are also fun to discover on your own.

Monkey Kung-Fu is its own style. It never appealed to me, but I enjoy the way Xingyi takes the 12 animals and incorporates their essence into fighting moves. This is one example.