If You Are In A Fight, Would You Use Tai Chi, Hsing-I or Bagua? 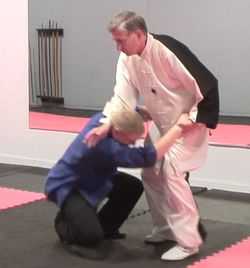 In a real fight, do the 3 internal arts cause you to freeze from too many options?
I have been asked this question many times over the years, in different ways. This morning I received an email and it was worded this way (the email is italicized):

Firstly, I enjoy your site. Thanks for sharing your knowledge and experience.

Each of  3 internal arts approaches the problem of self-defence in a different way. By learning all 3 arts does this promote a confusion in response to an attack- a mental freeze caused by having too many options.

I would imagine that the response would be determined by which response has been imprinted on "muscle memory" the most. If this is the case then does learning all 3 arts inhibit a quick response or at least not help.

On the other hand do all 3 arts feed off each other in some way which helps each one to improve? How do all 3 internal arts work together? Are they independent responses or interdependent?

Here is my reply to this excellent question:

I would be motivated by my shen. My palm would have eyes,my enemy would hear thunder and see darkness - a farmer out standing in his field.