Tai Chi Fighting - There Are No Transitions in Tai Chi 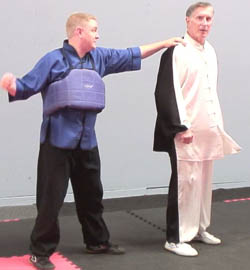 When I was first learning Tai Chi, the word "transition" was used often. Holding the Ball was a transition into Part the Wild Horse's Mane. Circling the arms was a transition for Brush Knee Step Forward. After changing teachers and styles, I learned a simple truth:

There are no transitions in Tai Chi.

As I later learned, a self-defense application is built into every movement in Tai Chi. Every movement.

No matter where your hands and feet are, a fighting application is there. 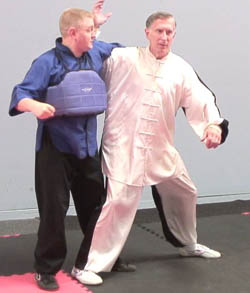 Here is a case in point, one of 108 self-defense applications demonstrated through 259 photos in my new ebook, Yang Tai Chi 24 Form Self Defense. The ebook is only $4.99 through Amazon Kindle -- a great reference for those who practice Yang style Tai Chi, particularly the 24 Form.

Let's say that someone comes up behind you and grabs your shoulder, preparing to punch your lights out. Now, this could even be done from a clinch position or against a punch, but I'm showing this particular set-up as a way to demonstrate the movement.

In picture 2, you step in and your arms have circled as they would in the "transition" before the hand moves out in Brush Knee.
Notice that you have used your leg to block his, setting up some pretty good leverage. Your arm is under his armpit. 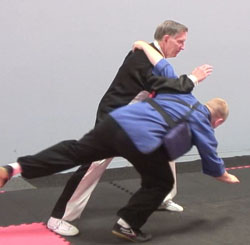 In picture 3, you do the movement Brush Knee and he falls over your leg.

Tai Chi is a closeup fighting art, designed to break an opponent and put them on the ground. It is a martial art. Every movement is a hidden or obvious martial arts technique.

If you are only practicing for health and meditation, you are not practicing a complete art. When you understand what the movements are designed to accomplish -- yes, the "intent" (which is NOT to cultivate chi) -- you will further understand how the body is supposed to move, and the "energy" you are supposed to feel.

Yang Style Tai Chi 24 - How Many Postures Can You Spot in This Video?

I published a Kindle ebook a few days ago showing 108 self-defense applications for the Yang Tai Chi 24 form, the most popular Tai Chi form in the world.

As Colin Frye and I worked on demonstrating the applications for movements in the form, with my lovely and talented wife Nancy on the camera, we videotaped some of the self defense techniques.

Can you spot the movements of the Yang 24 form in this video that the self defense applications were taken from?

How many can you spot from "Strum the Lute?" How many from "Part the Wild Horse's Mane?" There are 108 self-defense techniques demonstrated in the book with 259 photos and clear explanations. The cost is only $4.99. One reviewer, who has studied Yang style for years, says it raised his understanding of the form twofold. For more information on the ebook, click this link. And the next time someone asks you, "What is Tai Chi?" you can tell them it's much more than a slow-motion exercise for health and meditation. 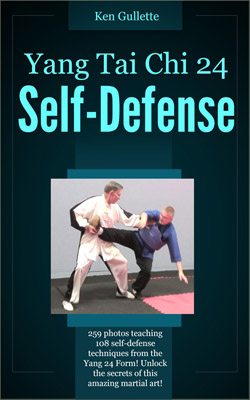 My newest ebook explores self-defense techniques hidden in the movements of the Yang Tai Chi 24 form. The Yang 24 is one of the most popular Tai Chi forms in the world, practiced daily by millions.

Most people practice the Yang 24 for health and "moving meditation," but since Tai Chi was created as a martial art, each movement in the form has many applications for self-defense.

I won a gold medal with the Yang 24 Tai Chi form at the 1990 AAU National Kung-Fu Championships. I practiced and taught the form for years. During the past two or three weeks, I took apart each movement in the form for their self-defense applications, and took photos of them for my new ebook -- Yang Tai Chi 24 Self-Defense.

The ebook contains 259 photos and instructions on how to perform 108 self-defense moves just from the Yang 24. It is priced at only $4.99.

Although I have studied Chen Tai Chi since 1998, I realize that there are people all over the world who still have no idea how Tai Chi can be used for self-defense. It is a powerful martial art. This ebook was designed to deepen the understanding of people who practice and teach this form. It is a guide on the true intent of the movements.

The ebook is available on Amazon Kindle. I will have a couple of posts later this week with samples from the book. 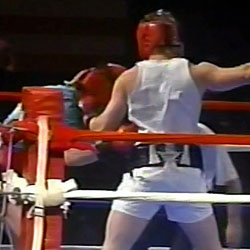 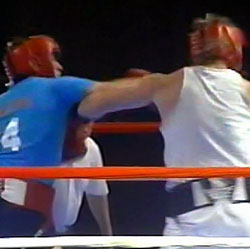