Preparing for a Laojia Yilu Workshop this Weekend with Chen Huixian 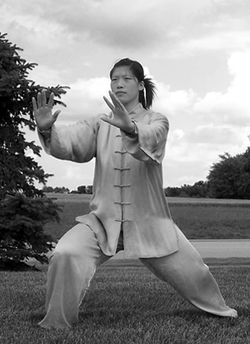 Photo courtesy of Chen Huixian.
People in the Chen Taiji community that I respect speak highly of Chen Huixian, a niece of Chen Zhenglei who now lives and teaches in the Kansas City area. If I lived in Kansas City, I'd be studying with her. I have also developed respect for her husband, Michael Chritton, through communications on Facebook. They are good people, and that means a lot in my book.

This weekend, Master Chen is holding a workshop in Madison, Wisconsin. I won't be there for the Friday evening workshop on Silk-Reeling. On Saturday and Sunday, she is giving corrections for Laojia Yilu. I've been looking forward to meeting her and Michael for a couple of years. I've never really trained, even in a weekend workshop, with anyone from the Chen Zhenglei lineage, so I am excited about the coming weekend.

It is interesting to me, as I see videos of internal artists and train with some, how they each have their own stylistic approach to the same form. It seems to drive some of my karate friends a little crazy. Uniformity is important in some arts, apparently. In Taiji, and as I've seen in Bagua and Xingyi, learning the movements of a form is step one -- learning the principles behind the movement is step two -- practicing and becoming proficient is step three -- and step four is adding your own stylistic flourishes, like an artist going beyond the basic brush strokes with an oil painting.

I found a video of Chen Huixian doing the first half of the form on YouTube this morning and watched it. Here is the video of Laojia Yilu part 1.

I definitely see influences of Chen Zhenglei in this demonstration. Chen Huixian and Michael are hosting him for a workshop in Kansas City this November. I plan to be there.

So I've spent a little more time than usual during the past couple of weeks practicing Laojia Yilu to prepare for the workshop. Is my posture good, is my internal strength connected when I move? And a dozen more things on the internal checklist that I ask as I move through the form.

I look forward to emptying my cup and tasting their cup of tea, learning new things, asking a couple of questions about stylistic differences, making new friends, and hopefully taking another baby step forward on this taiji journey.

Stay tuned for further updates along the way, including this weekend from Madison. There is still time to register by going to this page. And my thanks in advance for the sponsor of this weekend, Khiang Seow.