Home Archives Profile Subscribe
What is Internal Strength? New Kindle Ebook Available on Amazon
Investing in Loss - How Losing Your Ego in Practice Allows You to Win

Iron Wrapped in Cotton -- Does Your Philosophy Give You Internal Strength? 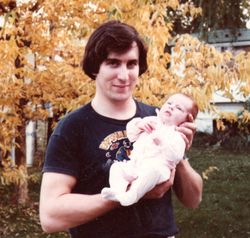 My daughter Shara, a few days before her sudden death in 1980. Life was about to hammer me very hard without a warning.
Do you have internal strength?

It has been on my mind a lot during the past couple of weeks as I prepared my first Kindle ebook for publication on that very topic -- Internal Strength for Tai Chi, Hsing-I and Bagua. It provides instruction on two basic skills for the internal arts -- establishing the ground path and using peng jin.

That allows you to begin developing relaxed power -- internal strength.

So we are supposed to take what we learn in the martial arts and also apply the principles to our daily lives, aren't we? It's not just for combat, you know.

Let's look at the concept of internal strength.

Do you have a philosophy that gets you through the rough patches in your life? Perhaps it's not philosophy but theology -- religion, faith in a higher power -- Buddhism, Christianity, Hinduism, Islam, or one of countless others.

Perhaps you have a philosophy that provides a lens through which you look at the ups and downs of life and make sense of it all.

My personal philosophy leans toward philosophical Taoism and Zen Buddhism. I do not believe that invisible beings are watching us and making decisions that have an impact on us. Believing in an invisible authority figure means that someone is in charge of this chaotic universe. It fills a primal need that started thousands of years ago.

In the end, it does not matter which way you go. Does your personal philosophy provide your mind with the attribute of "iron wrapped in cotton?"

I've known Christians who fall apart when bad things happen. I've known athiests who do the same. Why does this happen? I believe it happens because of a weak philosophical foundation.

The longer we live, the more loss we encounter. You may lose a job, a marriage, your parents, and the unthinkable -- you may lose a child, as I did more than 30 years ago. You may develop an addiction or a major health problem.

No philosophy or theology can shield you from life's trials and hardships. But you need an internal gyroscope that centers you after life knocks you down. A good philosophy can help.

When my daughter died suddenly at six weeks old, my world fell apart around me. In the funeral home, I picked her up out of the tiny coffin and held her in my arms for two days. I think my friends and family thought I was insane. I was walking wounded for a year or two after this, but even when I sat there in total grief and devastation, there was a little voice in the back of my mind saying, "You will get through it. Life and death are two sides of the same coin. How can you appreciate life if you don't appreciate the totality of death?" It was as if Master Po was speaking to me from the old Kung Fu TV show, and even as I sat there with my daughter lifeless in my arms, I knew that my philosophy was my emotional foundation, and it was working.

I have needed this foundation many times since -- the loss of jobs (TV news is brutal), the loss of marriages, missteps in relationships, and the loss of my left lung in 2009.

Life is a rotating circle of yin and yang. There are many good times, but even in the best of times, one thing is certain; the circle turns, and bad times will come. You may be at the top of your game at the moment, making good money and in a good relationship, as I was in 2008. I was Director of Media Relations at the University of South Florida, a very stressful position that I loved. Within a week, in April of that year, I lost my job and was diagnosed with atrial fibrillation. This led to three operations that resulted in the loss of my left lung (a rare side effect of laser ablation combined with malpractice by a pulmonologist who failed to recognize it).

During this time, I created my membership website on the internal arts. I hit a personal creative streak at a time when I should have been really bummed out. 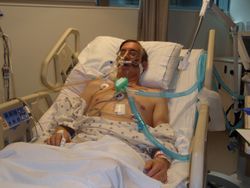 At the Cleveland Clinic in October, 2009, near death after my lung had shut down and my heart had been accidentally pierced.
I was lying in the Cleveland Clinic in October, 2009 after nearly dying when they tried to stent a pulmonary vein and accidentally pierced my heart. I was on a breathing tube, a chest tube also coming out of a hole in my chest to drain the fluid from around my heart, and attempting to drown every half hour or less as blood filled my lungs. I dropped from a muscular 206 pounds before being sick to 156 as I lay in the hospital bed in Cleveland. I had one good lung left but the diaphragm on that lung was paralyzed. I essentially was living with a quarter of my breathing capacity.

Doctors didn't think I would make it. But I was lying there, visualizing a tournament six months later that I wanted to compete in. I never was afraid of dying. I did NOT want to go so soon and leave Nancy, my daughters, and my grandchildren, but I was not afraid. I knew that death might be coming, but instead of thinking about that, I focused on the tournament that was six months away.

At that tournament in May, 2010, I won a first place trophy doing the Chen Tai Chi 38 form. My breathing was still horrible -- my diaphragm paralyzed -- but I had to do it for myself. I had already resumed teaching, despite struggling to breathe. Over the last few years, my diaphragm was paralyzed for two of those years, but suddenly, as I pushed it with internal arts practice, it began sparking back to life.

Yesterday (as I write this), I went for a major visit with my pulmonologist after taking a chest xray, blood work and a breathing test within the past couple of weeks. He gave me the news I had suspected as I have seen my ability to practice increase. My numbers have come back up, and the diaphragm is now almost completely back to life. I'll never get my left lung back, but at least my right lung is working well. There is a little bit of capacity that I could still regain in the diaphragm, and I believe it will happen.

Sometimes, your philosophy works when you are not even thinking about it. Last night, because I've spent so much time recently working on Internal Strength for the new Kindle ebook, I thought a lot about it. When you have Internal Strength, it doesn't mean you are superhuman. You still can be battered around by life and by people. You can be sad, you can be angry, you can be hurt. But if your internal movements can be trained to function like "iron wrapped in cotton," your goal should also be for your mind to function that way as well.

If your philosophy is not doing that for you, perhaps it is time to explore others. Because no matter what you believe, the Way still runs through darkness and shadow as well as through the light -- through bitter cold as well as comforting warmth. Your philosophy should provide the foundation that allows you to walk on.