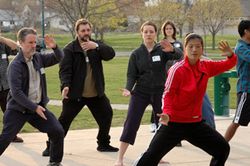 Photo courtesy of Khiang Seow.
Chen Huixian, a member of the Chen family living in the Kansas City area, will conduct a three-day workshop in Madison, Wisconsin on July 19 through the 21st (Friday, Saturday, and Sunday). The workshop is hosted by Khiang Seow, instructor at Madison Chen Style Taijiquan.

Chen Huixian is a niece of Chen Zhenglei, one of the top taiji masters of his generation.

I have never trained with anyone from Chen Zhenglei's lineage, but I've been wanting to meet Chen Huixian for some time, along with her husband Michael Chritton, so I am planning to attend the Saturday and Sunday sessions, when Chen Huixian will offer corrections for the Laojia Yilu form.

Go to Khiang Seow's website for more details and to download the flyer. My wife Nancy's parents were born in Madison. It's a cool town and we're looking forward to spending the weekend there. Nancy will shop till she drops and I will do Laojia Yilu till I drop!

Join me in Madison and let's support Chen Huixian and Khiang Seow in their efforts to keep high quality tai chi going in the Midwest!!

The Mysterious Power of Xingyiquan, Taijiquan and Baguazhang -- The Mystery Revealed! 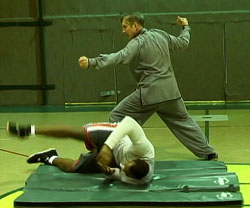 Oooh, it's so mysterious!!!
I saw an ad a few days about about the Mysterious Power of Xingyiquan (also spelled Hsing-I Chuan). It made me laugh a bit at first, and then I realized it was just one more way that someone was attempting to make the internal arts appear to be something they are not.

A photo on the ad showed a guy being lifted up into the air by the "mysterious" power of Xingyi.

A well-known tai chi teacher has a photo on the cover of one of his books where he is apparently launching some poor sap into the air with his internal energy. But a video exists of the photo shoot, and the guy being launched into the air obviously pushes off and straightens his arms to get himself into the air. It's embarrassing.

We see it all the time, don't we? It's pretty common for Taiji, Xingyi and Bagua teachers to pretend this is all mystical and mysterious, that if you just cultivate enough chi you can tap into some universal energy that will allow you to defy the laws of physics and medical science. They are pretty good at sounding like college professors or Taoist priests when they talk about chi. Heck, you'll not only be able to heal someone with your chi (or aura), you can even knock them down without touching them, according to some particularly unethical martial con artists. You can control people with your chi, don't ya know?

My friends, I'm going to reveal the secret to the mysterious power behind the internal arts. Are you ready?

It's body mechanics and hard work.

Yeah, that doesn't sound very mysterious, does it? Isn't it more fun to watch a movie where the master can catch a fly with his chopsticks and fly through the air? We all want those powers, don't we?

The body mechanics you need are:

These are principles that I embed into all of my instruction. They are most clearly explained in my Internal Strength and Silk-Reeling DVDs (the principles are also part of every one of the 600 video lessons on my online internal arts resource). It isn't magic but it is very hard work and takes years to develop. That's why it's easier to make people believe it's mysterious. If you told them how difficult it was, they might run away screaming screams.

That's what you call honest marketing. I don't want you to buy my stuff if you don't understand that it takes a lot of sweat, muscle cramps and fatigue to even scratch the surface of these arts.

I wish I could tell you Xingyi, Tai Chi and Bagua were dependent upon a Universal bolt of Taoist energy, or some invisible pathways of chi flowing through your body, but they aren't. And no human being can exert any force upon you that can't be explained by body mechanics and physics. 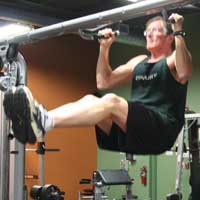 I've always been a believer in cross-training and have never bought the idea that you can do a really good workout in just a few minutes.

One of my best experiences was with a personal trainer -- James -- in Tampa. He made me realize through plyometrics and other exercises that developed explosive strength -- you don't need much beyond your body weight and some simple tools. It doesn't take a gym membership.

Now, the American College of Sports Medicine's Health & Fitness Journal says you can get a complete workout using only body weight, a chair and a wall. The workout includes a wall sit, push-ups, crunches, squats, lunges, triceps dip, planks, and more.

Take a look at this article. It makes sense. One thing is missing -- the chinup. So perhaps I would add a lucky 13th exercise to this list.

One of the Pleasures of Teaching Tai Chi, Xingyi and Bagua -- Making Friends 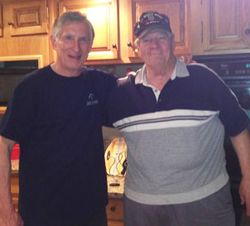 With Teddy Adams. One of the pleasures of martial arts is making new friends.
I was at work yesterday and got a call from Teddy Adams, who has been buying my DVDs and has been a member of the website for years. He and his wife of 54 years, Margery, were passing through town (they live in Arizona) and wanted to drop by to meet me in person.

What a fun evening. As Nancy and Margery bonded (Margery is a sweet and smart person), Teddy and I went to the Kung Fu Room and I asked what he had the most questions about after studying the DVDs and online material.

I believe video training is a great way to learn, but nothing beats hands-on corrections. He still wasn't clear on how to set up the ground path, how to use peng, and how to use the kua.

So we worked on it. I helped him establish the ground through various pushes, showed him how to manipulate it against different directions of force, and we worked on the other body mechanics, including silk-reeling. We practiced fajing on Bob the Heavybag, and I showed how all of the mechanics come together and you "put on the gas" for fajing. Finally, we went to the deck with poles and did some pole-shaking exercises, putting the mechanics together.

Teddy is 75 years old, he has bad knees, but his passion for martial arts is as strong as it was when he was a pilot in the service back in the Fifties and Sixties. He flew missions in Vietnam and later worked for companies as a pilot, traveling the world and seeking out martial arts. You have to respect someone like this.

And even though he had studied some tai chi, and has a deep interest in it, most teachers he has met don't have a clue about internal body mechanics, focusing mostly on the mystical and some sort of chi flow that makes them seem to be very deep and supernatural but does nothing to help students learn tai chi.

That doesn't surprise me one bit. I've been to some of those classes. Many of them, in fact. That's why I teach the way I do.

Within a couple of hours they were gone. "That was fun," Nancy said. Then she shook her head. "People are now dropping by town to meet the teacher." It was pretty cool, but even cooler was the look of understanding in his eyes as we went through different concepts.

An evening well spent. And now we have two new friends.