Focus on the Moon, Not the Teacher -- Taiji, Xingyi, Bagua Advice

There is a Zen proverb -- When a master points at the moon, many people never 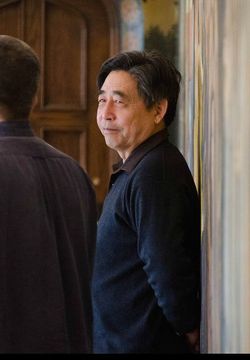 Grandmaster Chen Xiaoxing during a break at the Chicago workshop. Photo courtesy of Khiang Seow.
see the moon, they only look at the master.

Bruce Lee said it in a slightly different way, when he told the student, "It is like a finger pointing a way to the moon." When the student gazes at his hand, Bruce slaps his head and says, "Don't concentrate on the finger or you will miss all that heavenly glory."

I've been very busy since the Chen Xiaoxing workshop on Xinjia Yilu two weeks ago and haven't written much about it since that time. Instead of writing, I've been practicing the movements we went through in Chicago. It has been on my mind a lot.

The workshop was a great experience, and it was organized in a way that promoted learning. In workshops past, I would scribble as many notes as possible during breaks or at the end of the day, trying to remember the little details. In this workshop, remembering wasn't a problem.

Chen Xiaoxing would demonstrate a sequence of movements several times -- slowly -- and then he would include fajing where appropriate. Then he led the students through the sequence several times. Occasionally he would pause and go through one part slowly to show the correct way. Then we would work on the sequence individually and he would go around, watch people and make corrections where necessary. There were moments when I thought, "Okay, we've practiced this long enough, let's move to the next sequence," but I told myself to stop thinking that way and use the opportunity to really drill it into the mind. In the end, it was one of the better workshops I've attended as far as learning a form. 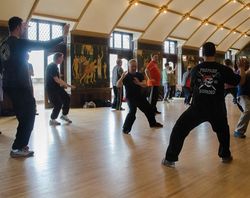 I am second from left during one of the times we were practicing a sequence individually at the Chen Xiaoxing workshop.
So when I was in the workshop, watching the Grandmaster as he went through each movement, I thought about the differences in the way different Chen masters do the movements and I remembered the Zen proverb. I reminded myself not to focus on the teacher, but rather, I tried to see through the particular movement and gaze on the moon. In this case, the moon would be the body mechanics and internal principles at work in this particular sequence.

When I first began studying Chen Taiji back in 1998, I remember thinking it strange that the masters often varied from one to the other in the way they performed. Later, I realized that they were each artists. They learned the basic strokes and then added their own personality, strengths and their own artistic flair to the movements. Now, I think it's fun to look at the differences. Sometimes, I uncover new ways of doing things and I can see concepts in action that I didn't see in a different master.

I've been remaining faithful to the way Chen Xiaoxing taught the movements two weeks ago. But I don't necessarily expect that to last forever.

At a workshop that I conducted last year, a couple of my karate black belt friends attended. They would occasionally want specifics. Exactly where is the hand supposed to be on this movement? Exactly what is the stance supposed to be here? They are accustomed to everything being exactly the same, and all black belts expected to perform exactly the same way, and they weren't prepared for a situation where I wasn't moving their hand a millimeter this way or that way to "correct" them. Instead, I tried to talk about the internal body mechanics they were trying to achieve. Whether your foot is pointed at 45 degrees or 40 degrees doesn't really matter if you have the body mechanics and structure that you need.

And so, I tried to see deeper as I watched Chen Xiaoxing perform the movements repeatedly. How is he shifting the weight, how is he using the kua, how is he rotating dan tien, and can I see the relaxed strength unfolding through the body?

That's the moon, and as I practice the movements over and over, I may add my own little artistic flair here and there. When my own students learn it, and they do it in a slightly different way than I do, I won't care as long as they see the moon.

Tags: bruce lee, chen xiaoxing, it is like a finger pointing a way to the moon, when a master points at the moon, you will miss all that heavenly glory

Chen Xiaoxing and Xinjia Yilu -- A Good Workshop in Chicago 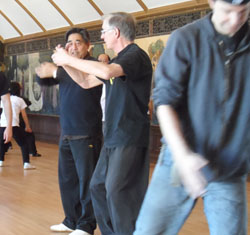 Chen Xiaoxing coaches Ken Gullette through a movement from Xinjia Yilu in Chicago, March 31, 2013.
This weekend, I attended a workshop held in Chicago by Grandmaster Chen Xiaoxing, who was teaching Xinjia Yilu. I've received some instruction on the form, including a little information from my friend and teacher Jim Criscimagna and also a short private lesson with Chen Xiaoxing's son, Chen Ziqiang. I still had questions about how to perform certain moves.

Chen Xiaoxing -- who just turned 60 (and so did I) -- is the younger brother of Chen Xiaowang. He stayed in our home for a week when Nancy and I sponsored his visa in 2006, allowing him to come to the U.S. for a series of workshops. He held one in the school we owned at the time, and trained with me in our basement for a week. It was a lot of fun and I got some great insights. He didn't speak a word of English and I didn't speak Mandarin, but we managed.

He recognized me on Saturday and we had a brief exchange through the interpreter at the workshop. Chen Xiaoxing loves to play darts, and he recalled playing magnetic darts in our basement during his visit.

This is the first multiple-day workshop I've attended since I lost the lung and 25 pounds of muscle mass, and I wondered how I would do. It wasn't a problem, but as I write this on Monday morning, I'd love to have a day off after the weekend. :) When you attend a workshop held by the Chen family, it is a strenuous event. You can come close to collapse from leg fatigue, especially when they put you into a proper stance. Real Tai Chi is very difficult and requires tremendous leg strength -- it isn't the weak Tai Chi where you don't break a sweat.

Chen Xiaoxing did more this weekend than I've seen him do in a workshop before. Each time we  began a new sequence of movements, he repeated them several times slowly, then he would put fajing into the movements. We were able to move around and watch from different angles to see exactly what he was doing with his hands, his feet, and his stances. 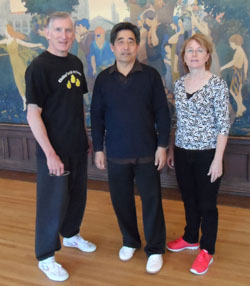 Ken Gullette, Chen Xiaoxing and Nancy Gullette.
Then we would practice as a group. After that, we would practice individually, as he approached us one at a time and corrected what we were doing. Then, he would take questions. One at a time, students would go up front and ask about a movement or a posture they weren't clear on, and he would patiently explain and demonstrate, then correct the student.

It's a rare and a wonderful privilege to have the opportunity to train and get direct feedback from one of the world's best Tai Chi masters. If you have the opportunity, you should do a workshop. But you better get in shape before you do. It is NOT your grandmother's Tai Chi.

My wife, Nancy, spent Saturday shopping on Michigan Avenue while I attended the workshop at the Ida Noyes Hall at the University of Chicago. Yesterday, since we were going home and everything was closed on Easter, Nancy came to the workshop, watched and took some photos. Afterwards, I re-introduced her to Chen Xiaoxing. It took him a couple of seconds but then he recognized her, laughed, and shook her hand. He told the interpreter, "It's been a long time." It was a great moment.

Now that I know I can still handle a workshop, I intend to get back in the swing of things and do more. 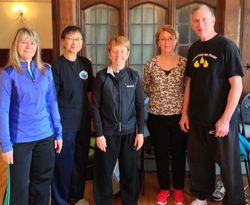 My thanks to Andy Loria for sponsoring the workshop. He is a disciple of Chen Xiaoxing's and owner of Chenjiagou Taijiquan USA in Chicago. And it was a lot of fun meeting some of the people I've heard about and met through Facebook -- dedicated Chen instructors (and disciples of Chen Xiaowang) including Kimberly Ivy of Seattle, Bill and Allison Helm of San Diego, Betty Dong of Phoenix (I first met Betty at a Chen Xiaowang workshop in D.C. 10 years ago), and Derryl Willis of Seattle. If you find yourself in any of these cities, you can't go wrong by meeting and training with any of these instructors.

I had a great time training and seeing people face-to-face. And today, this old body needs some ibuprofen. That's the sign of a good workshop!!