Taking Self-Defense and Martial Arts to A Higher Level 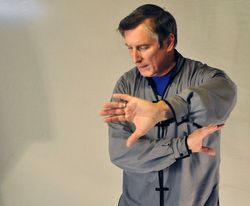 A higher level of internal arts is achieved when you think beyond self-defense.
I receive messages occasionally from anonymous Internet trolls who see my YouTube videos and make comments such as, "How will that work against an MMA fighter," or most recently, "What good is a sword going to do you in a street fight?"

When I was young, I thought you studied martial arts to learn how to kick major bootay. I wanted to feel safe everywhere.

It was shallow thinking. There is a lot more to martial arts than fighting. But you can't expect young people to think at a higher level. That takes time, experience, and study.

But I am a spiritual person. I believe in being kind to people, helping those less fortunate, and treating everyone I meet with friendship, humor, and cooperation. I believe in treating my wife with love and respect and making children laugh. I have worked a lot of my life to be a better person and a centered person. Like every human being, I occasionally fall short, but we continue trying, don't we?

This takes time, experience, study, and reflection. A higher level requires some sort of inward gazing -- in my case, chi kung (qigong) and a great deal of time studying and pondering philosophical questions.

My favorite part of the internal arts continues to be decoding the self-defense applications within a movement. But we also practice being "connected" to our opponent. My opponent moves and I move with him. When he arrives, I am already there. We have drills that are used to help students understand the concept of connecting, and the goal is to carry the physical sense of connecting to a higher level, where you then connect with the people you meet and work with each day, you connect with the environment, and you connect with the universe. It's a higher level of martial arts.

I never expect to be in a fight again. I don't intend to use my arts for fighting. Don't get me wrong -- I would be ready to defend myself or a loved one if needed. If I saw someone being attacked while at the mall or on the street, I would likely intervene. But that's not why I study anymore. I haven't been in a real fight, other than tournaments, since I was 18. Now that I'm turning 60 later this month, it would be pretty silly to think that I'm going to be fighting anyone.

An important part of martial arts training is the spiritual. It has been lost by a lot of martial artists and a lot of schools. There is a tradition that you are helping to carry forward, and there is a deep satisfaction when the mind and body come together to do a perfect technique. Perfection doesn't happen often, but when it does, something wonderful happens in your mind. When I connect with a partner so that I already know when they are going to attack -- it's an amazing feeling.

The martial arts -- the internal arts -- are a means to achieving physical and mental perfection.

But there is another key point that you must realize to get to that higher level.

The best fighter wins without a fight. You do that by remaining centered -- avoiding going to places where you might be attacked -- talking down someone who is ready to attack you -- or leading their comments into emptiness.

In The Art of War, Sun Tzu wrote that the best generals win battles without fighting.

So why do we study a martial art? It's about self-discipline, self-control, and self-confidence. By making yourself stronger and able to defend yourself well, you have less of a need to prove your point. You have less desire to fight. You have little interest in inflicting pain. You find the connection between you and other people -- in fact, with all things in nature.

Someone who is truly connected carries themselves with dignity, with calmness, with caring and doing unto others as you would have them do unto you, as I learned in Sunday School when I was a kid.

That has nothing to do with fighting.

Another point that the trolls bring up -- why do I incorporate straight swords, broadswords and elk horn knives into my practice? On a practical level, you aren't going to pick up a sword on the street if a group of guys attacks you. But once again, the personal growth that I feel from developing skills has nothing to do really with fighting. After all, the phrase "martial art" includes the word "art." I am expressing myself through my art, learning a physical skill and techniques with a traditional weapon, and engaging in an exercise that feeds the mind and the body.

On the other hand, if you can pick up a stick in a self-defense situation, sword techniques will be very handy. But this possibility is also why I train with single and double sticks.

Another point on the practical side -- when we see the damage that can be done to a human being by violence -- the fact that you can kill someone with one good punch should make you want to avoid the possibility of the legal problems (not to mention possibly losing your job) that an adult would likely suffer if a fight broke out.

Fighting is a young man's game. One of the reasons I'm about to turn 60 is because I never went looking for fights and actually tried to avoid them as an adult. I've had my chances, but managed to diffuse the situations that could have resulted in violence. That's harder to do when you're young and not thinking in a centered way.

In the Tao Te Ching, Lao Tsu wrote, "Powerful men are well advised not to use violence, for violence has a habit of returning."

Words to live by. And so we study, practice, look deeper, and seek to achieve a higher level, which some call The Way.