Your Ego Is Holding Back Your Tai Chi and Your Career 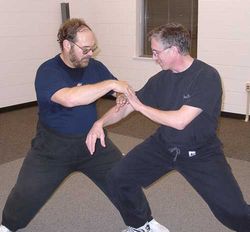 One of my best teachers - Jim Criscimagna - coaches me on push hands around 2004.
When I worked in TV news, few veterans took the time to coach me. I had the good sense, however, to watch good people and take note of the way they were writing and delivering the news. I pushed myself to get better.

I probably hit my peak just before I left the business when I did an award-winning series called Robb's Life, which is now on YouTube in about 36 episodes.

In 1989, I became a news director -- in charge of the entire newsroom. I decided that I would do for people what nobody had done for me -- give them real coaching so they could cut years off their development. I would regularly sit down with employees -- reporters, videographers, anchors, producers -- and I would look at their videos and give them tips on how to push the creative envelope, how to shoot better video and tell a story, how to write more clearly.

Once, I was coaching a sports veteran whose stories were tired and cliched -- he would say, "The Rocky High School team really wants this game," and a sound bite with a coach would come on saying "We really want this game." Really boring stuff.

One day, we watched one of his reports together in an editing room and I gave him some tips -- mainly, I thought he should pick someone on the team with a good personal angle and tell the team's story around that player.

I was stunned. "Of course I like you. This isn't about liking you, it's about being more creative."

He didn't improve. Within a few months, he was let go.

Michael Golden was different. He would watch me work and I would coach him. He absorbed it, then went out to California for a reporter job that earned him high praise and even a profile in Brill's Content magazine. Michael called me when the story was published and said, "Ken, they edited you out. I told them that my creative reporting started with a good news director."

Another anchor -- a beautiful girl named Sarina -- went from the Quad Cities to New Orleans for a job interview. She came back and said the news director in New Orleans told her she knew more about news than a lot of veterans in his newsroom. "I told him I had a good news director," she said.

Over and over the pattern was repeated. Employees who took my coaching to heart and tried to improve went to larger cities and earned larger paychecks. Those that didn't want to hear that they could possibly improve ended up sabotaging their own careers.

What does this have to do with tai chi, hsing-i, bagua, and other martial arts?

Last weekend one of my students said, "I owe you an apology." I asked why. He explained that a few years ago, I gave him regular coaching on the forms that he was doing in class and in tournaments but he wouldn't listen. He thought his forms were fine.

"I watched them again," he said. "They weren't fine. You were right."

It was a remarkable comment that revealed personal growth. This student has become an outstanding martial artist and, like me and everyone else I know, still has a long way to go to really understand these arts and perform them as they should be performed.

I've had a couple of really great teachers. They were blunt and direct with their critiques. Sometimes gentle and sometimes funny, but also they could bark out some advice if I wasn't getting something. 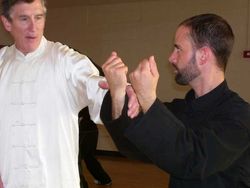 Coaching a student in a workshop at East Lansing, Michigan in 2010.
You see, in our own minds, we think we look like Bruce Lee or Chen Xiaowang. In reality, we resemble Charlie Chaplin. It takes years -- many years -- to improve at this stuff and that's why it's called kung-fu (a skill attained through hard work).

In some schools, students don't get a lot of personal feedback. They also don't always have very good body mechanics or precise movement. I get picky with my students because I want them to know what they're working toward -- when they perform their arts, I want them to reflect well on the art and on my teaching. I want them to appear in front of Chen Xiaowang and have him say it's good.

As a coach -- in business and in martial arts -- it's my job to help you develop your own skills so one day you can return the favor by coaching someone who isn't as far along. But you have to open your mind and realize that the day you think you don't need critique is the day your martial arts -- or your career -- stops getting better.

Your ego is getting in the way. It lies between you and your quest to become a better martial artist. It also hurts you in the business world. Move it aside and listen when someone is kind enough to be blunt about how you can do a better job.