Home Archives Profile Subscribe
I'm Not A Doctor, But I Play One In The Dojo
Entering the 40th Year in Martial Arts - A Kung-Fu Journey 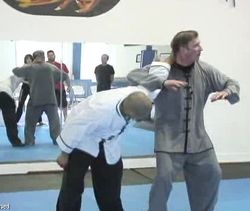 I love the Chen 38 taiji form. Oh yeah, you can say that it's not as satisfying as Xinjia Yilu, but it's still a beautiful and fairly short form.

Today, I threw my Chen 38 DVDs into the player. I was curious about how many fighting applications are taught on the discs.

It's a 2-disc set with almost 4 hours of instruction. Each movement is demonstrated from different angles and then I go into detailed instruction with an emphasis on internal body mechanics.

After each movement is taught, there is a section on the self-defense applications of the movement. Many of the applications were taught at a workshop I held in Moline in late summer, 2009 -- three years ago as of this writing. Martial artists attended representing several styles -- Shaolin, Taekwondo, karate, even a local tai chi instructor who focuses on Yang style.

Today, for the first time, I noted each self-defense application. I had never counted them before and was surprised at the result.

There were 173 applications demonstrated for 38 movements.

It's also interesting to hear the video -- the audio was edited heavily because I had lost a lung that summer and didn't even realize it when I held the workshop. Looking back, I can't believe I even made it through. Within 2 months, I would be near death at Cleveland Clinic.

I've included a clip of the DVD below, showing some of the applications for movement 5 -- Walking Obliquely.

The Chen 38 contains elements of Xinjia -- more obvious spiraling than the Chen 19. It's the second form that I teach taiji students and we've won a lot of tournament forms competitions with it. I learned it from Jim and Angela Criscimagna, and they hosted Master Ren Guangyi for a couple of workshops on the form that I attended. It was great instruction. The form is wonderful, full of fluid moves with bursts of fajing.

But diving into the fighting applications is what I love most.