Home Archives Profile Subscribe
Do You Ever Suspect Something is Missing from Your Tai Chi? I Did...and Then I Discovered The Teacher Test
Is Tai Chi Really Intended to Be Moving Meditation?

Kellie Wells and the Heart of a Champion - What's Your Excuse? 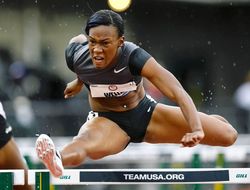 Kellie Wells was raped by her mother's boyfriend when she was a sophomore in high school. She left home. A month later, her mother and the boyfriend were killed in a car accident.

Kellie Wells had every excuse to give up. She could easily have sat on the couch and done nothing. Who would have blamed her?

But she had the heart of a champion. She channeled her energy into her sport. This week, she won a bronze medal in the Olympics.

I love this woman. I love her spirit. I'm so happy for her.

She has the heart of a champion. I sat there, watching her get a medal, and I got teary-eyed at the fight she displayed. It's not unfamiliar territory for me.

What excuses are you using for not practicing -- for not working out -- for not improving your skills? Most people use pretty lame excuses. It's too hard to have a job and practice -- I'm married -- I have kids -- I'm too tired -- I'm too busy -- I'm too old. Since I started teaching in 1997, I've heard all the excuses, and I have one question:

What the hell is wrong with you? 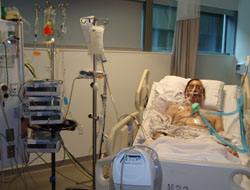 Near death in October, 2009 at Cleveland Clinic.

Almost three years ago, I was near death at the Cleveland Clinic. Intubated and a tube coming out of my chest -- drowning in blood that built up in my lungs every few minutes and having to make a motion to the nurses to suck it out or I would die.

As I lay there, after losing one fourth of my body weight, heavily sedated so I wouldn't choke on the breathing tube, I had one thing on my mind -- practicing kung-fu and competing in a tournament that was coming up 7 months later. I lost a tremendous amount of muscle mass. I had dropped from 206 to 156 pounds. I was so weak, I couldn't lift myself out of bed. The nurses used a bedpan on me. It was the most degrading experience of my life.

When we left the hospital, by the time we drove home my ankles and feet were swollen like a monster. I was still coughing up blood three days after getting home. I lost my left lung forever. And my right diaphragm was paralyzed, so I was trying to recover and able to use only three-quarters -- or less -- of one lung. 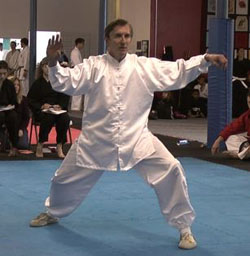 Seven months after being unable to lift myself up out of bed, performing the Chen 38 and winning first place in forms at a Moline tournament.

Seven months later, I won first place doing forms at the tournament that I visualized when some in the hospital wondered if I would even get out of there alive. During the competition I could hardly breathe.

Almost two years ago, a cardiologist at Mayo Clinic told me that my heart would give out within three to five years. Another cardiologist was more optimistic. He predicted ten years. One of them said the more I exercise, the faster my heart would fail.

Don't let yourself be stopped by the crap that happens to you in life. You push forward. You do what you love to do. You set goals. And you take baby steps to make those goals happen.

Celebrate life. Celebrate the martial arts. And go for it. Anything else is throwing your life away, and as I learned very quickly, life is too precious to waste, and it goes by WAY too quickly.

I love Kellie Wells. You should too. Now get your butt into gear.

I personally have doubts when doctors say with certainty how much time left we got to live. Sometimes if we buy into it, it becomes a self fulfilling prophecy. If we think about it, no one knows our own bodies better than ourselves.

Thanks, Gary. You're a good man. And you're right!!

Seeing that picture of you in the ICU still gives me chills.

Glad you're still around...