Is Tai Chi Really Intended to Be Moving Meditation? 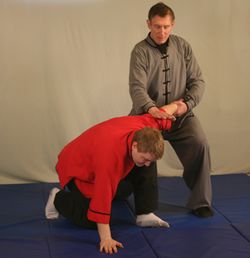 Is Tai Chi really "moving meditation?" This may be a controversial topic. Fasten your seat belts.

Is the purpose of Tai Chi Chuan to detach your mind, relax and become One with the Universe?

It can be used that way, and certainly millions of people do. But it was created as a martial art, and the "intent" of each movement is to develop body mechanics and structure that will help you break an opponent and put them on the ground.

Should you practice Tai Chi with "no mind?"

Each movement should be done with the body mechanics of the fighting applications in mind. That can be slowly as you work the body mechanics and try to get better at the flow of relaxed power through the body, and it can be done very fast, with strong fa-jing movements.

If you disengage the mind, you lose the intent of the movement.

Is Tai Chi good for exercise and health?

Of course it is. When done the way it was intended, Tai Chi is an amazing workout.

I've told the story before of the time I did a Chen form at a martial arts tournament. The judges were from a variety of mostly external arts. I had warmed up and stretched and it was warm in the room and by the time I was finished, I was perspiring a little.

One of the judges -- a karate black belt -- later told me he marked my score lower because I was sweating. "There's no sweating in Tai Chi," he said.

He has never trained with the Chen family. It's a brutal workout, and it isn't unusual to feel like collapsing from leg fatigue. Quite often, new people who come to one of our practices feel the pain, especially in their legs.

For more than a decade, when I first learned Tai Chi, I was practicing Yang style forms and I was detaching and trying to use them to build chi and meditate.

Then I found Chen style and a new world opened.

This is not moving meditation. Every movement in Tai Chi is a self-defense movement (yes, even in Yang style). Every one. On my 3-disc Tai Chi Fighting Applications DVDs, I show more than 400 fighting applications from one Tai Chi form.

When I lived in Tampa a few years ago, Nancy and I went to a beginner's Tai Chi class at the local school of a national "chain" of Tai Chi schools. It was mind-numbingly simple and devoid of body mechanics. Nobody broke out in a sweat and certainly no one was physically challenged. They were nice people, but it was extremely weak Yang style.

The reason most Tai Chi people in the U.S. think that Tai Chi is moving meditation is because that's what their poorly taught teachers have told them. And let's face it, those teachers are not teaching much in the way of internal body mechanics, so just about all that's left is slow-motion movement that is very appealing to the elderly. And the story persists and grows that this art is about moving meditation.

I know people who are getting older and no longer in need of the martial aspects of Tai Chi. It makes perfect sense, now that they know the forms well, that they can disengage the mind and use it as exercise and meditation. No problem.

If you want something to use for meditation, use qigong. It isn't typically used as a martial art and the purpose is to "work" the chi and make yourself healthier. A few minutes of qigong -- detaching the mind and focusing inward, calming your body and your mind -- can feel like you've taken a nap. I can testify to the positive impact it has in stress management and the ability to remain calm in a crisis.

Are you looking for meditation? Try qigong.

Are you looking to do a martial art? Do Tai Chi.

You can do Tai Chi to detach your mind, but it isn't really Tai Chi when performed with "no mind."