A Life Lesson in Death: The Passing of Grandmaster Feng Zhiqiang 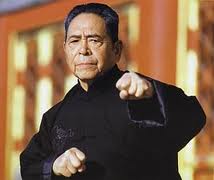 I am always broken-hearted to hear of the death of any kung-fu master, so I was very sorry to hear that Grandmaster Feng Zhiqiang passed away a few weeks ago. My condolences go out to his students and his family.

When great masters die, I check to see how long they have lived. Usually, it isn't a lot longer than the general population.

And now comes the part of the post that some may find controversial but it is intended to carry the utmost respect for Grandmaster Feng.

He was a disciple of Hu Yaozhen, a Taoist qigong master. Grandmaster Feng studied with him and also with the great Taiji master Chen Fake. Feng eventually developed his own style of Chen Taiji that included qigong, silk-reeling exercises, etc.

I receive messages and scoldings occasionally from people who claim that qigong, and Taoist qigong, if done properly, will mean you will evade illness and disease, and will result in a very long life. I received some of these messages after I developed atrial fibrillation, and a surgical procedure resulted in the closing of my pulmonary veins. Basically, I lost the function of my left lung three years ago.

A few well-intentioned but moronic messages were sent to me advising me -- in all seriousness -- that this wouldn't have happened if I had been doing qigong properly.

So here is the main point of my post:

Feng Zhiqiang lived to 84 and practiced Taoist qigong. As it turns out, his master, Hu Yaozhen -- the Taoist qigong master -- passed away at age 76. Chen Fake died at age 70.

There is nothing magical or mystical about qigong -- even Taoist qigong. It will not make you live longer than the general population. It might help the quality of life while you are here -- it might help you calm yourself, find your center and maintain it in moments of crisis. For that, it's very helpful.

But make no mistake -- qigong and Tai Chi will not help you achieve immortality, and it will not prevent you from developing cancer, heart disease, or a host of other illnesses. Please stop pretending -- or spreading false information -- that Tai Chi and qigong somehow make you live longer than other people. There is absolutely no medical or legitimate scientific research that shows that this is true.

Death finds us all. And from what I've seen, it takes Tai Chi masters and qigong masters along with the rest of us, with no discrimination.

Let's stop the fantasy -- and call people out who encourage that fantasy.

While I appreciate your effort to demystify Taijiquan and Qigong, I don't find your argument convincing. I suspect a person's lifespan is determined mostly by genetics. After that I would list environment. That said, I find it not at all convincing when you say that because your wife's parents in the United States lived longer than a Taiji/Qigong practitioner in China we should conclude that Taijiquan and Qigong have no positive effect on longevity.

Garold, if a person's lifespan is determined mostly by genetics and environment, then qigong is even less important, isn't it? I don't necessarily disagree with you. My point is that I have talked with many people who think qigong can make you nearly immortal and free from illness. All we have to do is point to the qigong masters to see that it isn't so. If my analogy with my wife's parents doesn't persuade you, that still doesn't make my point less true.

Let's put aside Daoist immortals and two-hundred-year-old residents of Shangri-La for now. I don't think they interest either of us except perhaps figuratively.

After genetics and environment I would say an individual's decisions and actions (e.g. diet, type and amount of exercise, etc) bear most importantly on their longevity. We can dig our graves with our teeth or by being sedentary.

I believe their is evidence, most of it coming from studies done in China, supporting the notion that Qigong can extend a person's years. I'm not suggesting this extension would be great, but it could be significant. For example, had Feng Zhiqiang not done Qigong and Taijiquan he may have died in his seventies or earlier. There is no way to know this, but I don't think it is a preposterous as other claims made for the practice.
Garold

Thanks, Garold. I agree.

Thanks for the forum and the opportunity to discuss.

The air quality is horrible in China. I've always thought (and still do) that a good qigong practice will add 5 years to your life... but maybe so does any healthy routine (ie. yoga, tai chi, etc). But like others have said, environment plays a big role, as well as diet. In these modern times, the western diet has crept in and increased mortality rates across the board.

Hello,
I would like to express respect for free speech and courage for going off the beaten path.

There is no doubt that 70 years are shorter than 92 on the calendar just like a mile is shorter than two miles...
I would like to suggest a different point of view though and share my personal experience having been a taijiquan student for a while now.

Imagine walking, let's say, a mile in the woods and breathe, listen, get in touch within yourself and connect with nature and other people you might encounter on the way.
Would you say your journey was shorter than driving ten miles on a car?

So, in my experience, tjq and qg may not make your life longer (I'll tell you when I die) but they sure help living it deeply and largely by transforming yourself and how you live and perceive, not by magic but through methodical and replicable work passed down by Masters.

Are tjq and qg the only way to "enlarge your life"? I don't think so.
But it's a way and if we enjoy we can take the first step.