The Power of Habit and How It Helps Your Bagua, Tai Chi and Hsing-I 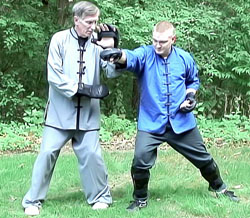 A new member of my membership website was asking about fighting with Bagua. He is new to the art and wants more material on Bagua fighting.

I have been shooting videos recently to boost the online content in this area, but I reminded the young man that before he learns to fight with Bagua, there are many other things to practice -- namely, the basics.

Anyone can throw a palm technique or do a joint lock and takedown. Doing it properly according to the body mechanics of a particular art is the difficult part. You can't breeze through the basics and expect to use the art.

Interesting research on the brain shows that we develop habits when they become ingrained in our basal ganglia, a cluster of brain cells that stores habitual acts and behaviors. 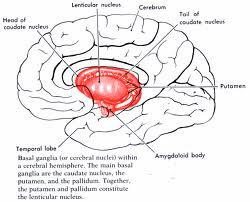 According to the book "The Power of Habit," you can put a mouse in a maze with a piece of cheese at the end. If you hook electrodes to the mouse's brain and watch as he enters a maze for the first time, his brain activity is very high. He's processing new information and trying to figure out where the cheese is located.

After the mouse finds the cheese, if you put him in the same maze day after day, something interesting happens. His brain activity decreases. Before long, he can find the cheese without even thinking about it, and it doesn't require much mental activity.

You develop the same type of habits and brain activity every day. You don't have to think about how to brush your teeth. It's habit. You probably can even drive your normal route to work and your mind wanders on other thoughts, or listening to music or an audiobook, then you arrive at work and realize you weren't really paying close attention to the driving. The brain does it for you, while you spend mental energy on something else.

This same principle must be used in martial arts. Step by step, we learn basic techniques. In Bagua that would be Internal Strength exercises, silk-reeling exercises, tea-serving exercises, mother palms, circle walking, other footwork, sinking your "energy" and remaining centered.

All this could take months -- even years -- to get right.

Then you work on forms and fighting applications. Only after using applications against a real sparring partner -- over and over and over, hundreds or thousands of times -- can you internalize them so that when you are faced with certain attacks, you can respond without requiring a lot of brain activity.

As a teacher, it can be frustrating for people to learn material enough to pass through a level, then a few months later you ask them to perform a technique they learned and realize they have forgotten it. This may have happened to you even as you practice.

In the movie "Enter the Dragon," Bruce Lee said, "I don't hit. It hits all by itself."

Once skills are internalized, "you" don't use them. The brain knows what to do. The technique uses itself. But getting there is where people have a problem. Practicing enough times to make it second-nature is the challenge we all face in our busy daily lives.

There is no short cut.

How Much Would You Pay for Quality Tai Chi, Hsing-I or Bagua Instruction? 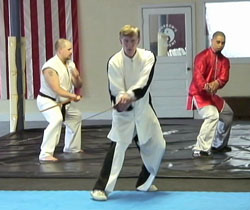 An interesting discussion took place recently online with some of my martial arts friends. How much is too much for a private lesson from a master?

Some of the Chinese masters are now charging up to $500 an hour for private instruction. Grandmaster Chen Xiaowang is one of those. The cost of seminars is rising, too. One of the younger masters in the Chen family -- Chen Ziqiang -- is charging at least $60 for a 3-hour workshop and a little less for a 2-hour workshop.

You can't learn very much about Xinjia Yilu or the Chen straight sword form in two or three hours. And you certainly can't go beneath the surface. You can't learn a lot about push hands when you spend two hours training with some people attending who are rank beginners.

That's one of the problems that veterans are beginning to see with this "top level" instruction from Chinese masters. It isn't always very deep at all -- the same beginner stuff year after year. But they are paid big bucks because we want to be close to the Source.

I've spent thousands of dollars and traveled thousands of miles to study these arts. I've flown across the country more than once, driven two or three hundred miles up to twice a week, and paid good money to try to peel back another layer and take one more baby-step.

I put everything I've learned on video and for nearly four years, I've been building an online membership website where it's all available -- not for $500, not for $200, not even for $100. Nope. Members are able to wade through nearly 600 video lessons for $19.99. And if they get a lot of value out of it, they stay for another month and another $19.99. I have a handful of people who have been members from the very beginning. They see all the new videos that pop up. I put one on today for the Chen Straight Sword form that includes an outstanding lesson that every internal artist needs to practice.

When I put the latest video online today, it hit me again how people can save years -- and thousands of dollars -- by watching these videos instead of waiting for an instructor to teach them these principles, skills and techniques. And if you're studying with a Chinese "master," he or she may never teach them to you.

One of my favorite comments have come from my online members and DVD customers. One black sash instructor said as he watched my videos, he wondered why "no one every told me this before now." He studied for years with a "master."

Another member said he was "impressed that you hold nothing back."

How much is that worth? What would you pay? Some of my martial artist friends say the costs of the Chinese masters' workshops have exceeded their ability to pay, especially considering how little you get in return. Is a photo op worth it?

Every time I sell an instructional DVD, I know that the buyer will return for a few more -- because I lay it all out there in easy-to-understand terms. It doesn't cost $1,000 for a round trip to San Francisco (which I've done more than once). It doesn't cost years of studying. You don't have to wait for a master from another country to decide if he wants to give you "the secrets."

I'm considering attending a workshop or two this year. I might even take a private lesson from a master. I'll ask questions and try to get answers that take me another step in my quest to build skill.

And then I'll pass along what I learn, as I always do. I'd like to invite you along on the journey.

Which Should Come First -- Silk-Reeling Exercises or the Taiji Form? 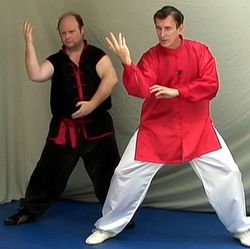 I received an email today from a guy who had an interesting question -- which should you practice first, the silk-reeling exercises or the Chen 19 form?

It's a complicated question, and I tried to explain why.

In the Chen Village, traditional training didn't involve silk-reeling exercises as we've gotten to know them in the West. Those were created fairly recently. From what I've heard and read, members of the Chen family started training Laojia Yilu. The Chen 19 is a form created by Grandmaster Chen Xiaowang as a shortened version of Laojia Yilu that fits into Westerners' busy lives.

The silk-reeling exercises are movements that are derived from the forms, along with certain skills such as the shoulder spiraling which are crucial in many movements.

I start beginning students with ground path and peng, then silk-reeling, as I also explain the other skills. They practice these before starting the Chen 19.

Should students learn the Chen 19 before Laojia Yilu? That's a controversial issue, too. Some take a traditional view that if it isn't taught as part of initial Chen Village training, it shouldn't be taught. My view is this -- it doesn't matter if you're doing Laojia Yilu or the Chen 19 -- more than likely you aren't doing either one of them correctly for years. And if you do either one well, you're doing Taiji, so what difference does it make?

Often, if my day has run away with me and I've run out of time, I'll pick one of the silk-reeling exercises and practice it, working on the flow, the whole-body movement, and the essential body mechanics. A good silk-reeling exercise is good Taiji if you do it right, so practicing one movement repeatedly or 75 doesn't matter as long as you get something out of it.

But the question --- should you start with the silk-reeling exercises or the Chen 19 -- is difficult to answer. I guess it all boils down to who is teaching you, and if they're teaching the skills you need to know to do them properly. If they are, then just enjoy it, and practice what your instructor says to practice. If you're learning on your own, either choice is okay, as long as you understand you need to get personal correction from a teacher as soon as possible.