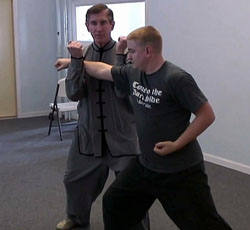 Working with Colin on an elbow break.

Recently, I received an email from a woman who has studied tai chi for a while and bought a couple of my DVDs. She is Asian but lives in the United States.

She said my Internal Strength and Silk-Reeling videos taught her information that her "master" never taught. In the email, she said "Thank you, Master."

I corrected her and told her I'm not a master and don't have enough time in this lifetime to become one.

Her response was interesting. She said she had studied DVDs by several Chen masters (she named them but I won't do that here) -- and she said that I was the only one teaching body mechanics in any detail. She found it curious that the masters she had seen on video and in person never told her any of the information I share. She said that many of the teachers she knew in martial arts demand to be called Master, and I don't, yet I teach quality material to everyone.

Her email was very kind, and we had some very nice exchanges. It also made me think, which is dangerous but something I do occasionally. 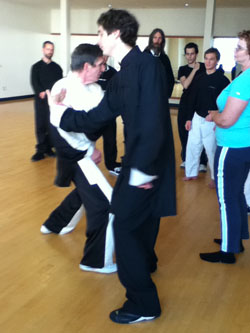 Teaching a workshop on Chen Taiji in East Lansing, Michigan.

I'm a student of Chen Tai Chi, Hsing-I, and to a lesser extent, Bagua. I've had a couple of good Chen teachers who asked questions of the Chinese and tried to look under the hood, seeking information in a slightly more direct way than a Chinese student would do. And although the masters try to hold back information, we know a lot more about the internal arts now than any Americans did in the 1970s, 1980s, even the early and mid 1990s. It was about that time that top Chinese masters began coming to the U.S. to develop disciples, teach workshops, and make a LOT of American dollars. At the same time, they faced Americans who ask questions of authority figures instead of merely doing as they're told.

I'm still working on getting better and I have a long way to go. But I know a little bit about which direction I need to go because I've had some good instruction, and I share that with people who haven't learned what I have learned.

My movements will never be as good as some of the Chinese masters, but the golf pro down at the local country club will never play as well as Tiger Woods or Phil Mickelson, either. Does that mean the local golf pro has nothing to teach me about my driving, chipping and putting? Of course not. He could make my golf game a lot better.

Not many college or high school basketball coaches could play in the NBA -- even when they were young.

It's an interesting question. Are you a Master or a teacher? Just because you are one doesn't mean you are the other.

Don't ever call me master. I might demand that my wife Nancy call me master, but she would only laugh. Then she might kick my butt.

I'm a student and a teacher. I don't expect that to ever change. And I really don't need it to change. What do you need?