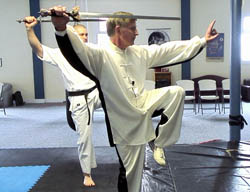 Last Saturday in Moline, Illinois, I conducted a four-hour workshop on the Chen Tai Chi Straight Sword Form. The form has 49 movements, so it was a challenge to teach each movement and include quality information about body mechanics and the applications for the movements. But with a hard-working group, we did it.

The sword form is a great Taiji form -- smooth and powerful, it can be done slowly or fast with fa-jing. Always, the internal body mechanics should be present: 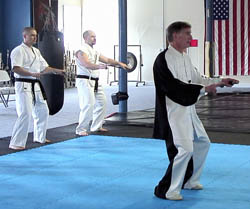 I've heard instructors in the past talk about "extending your chi to the end of the sword." And for those who have their heads in fantasy, that confuses things.

The "intent" of each movement in a Tai Chi form is its fighting application and how you are using the body mechanics against an opponent. By utilizing the body mechanics listed above, you make the sword an extension of the body and you are able to use proper movement. In an abstract way, you could say you are "extending chi" through the sword, as long as you understand that there really isn't some mystical energy flowing out of your hands and across 4 feet of steel.

We videotaped the workshop and individual video lessons will be showing up this weekend on the online school. In a few weeks, it will become a DVD (and will be listed on the right side of this page with other DVDs).

One of the most satisfying things about doing a workshop like this is working with people from other styles of martial arts. Attendees had studied karate, Shaolin, and even some Filipino arts. The body mechanics of the internal arts were foreign, and it was fun seeing some of their reactions as it dawned on them. Most people don't understand internal body mechanics, even if they've studied arts such as Yang style Tai Chi. Seeing the light bulb turn on above their heads, and their eyes light up as they suddenly connect physically with concepts they've only heard about is satisfying as a teacher.

We had to rush just a bit to finish all the movements in four hours -- and there was a lot of sweating, groaning, and effort. It was an outstanding workout with an outstanding form. 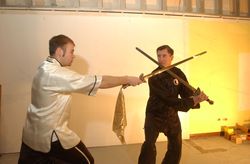 The fee is only $45 and attendees will agree to be videotaped as we shoot the workshop for an instructional DVD. Each person will get credit on the DVD and will receive a free copy when it's edited next month.

It will be a challenging four hours. We will explore all 49 of the movements in this form -- the only straight sword form in traditional Chen family Tai Chi.

The sword form is done fast and slow, with smoothness, good internal body mechanics, and fa-jing. The way you handle the sword in each movement, and the intent or "energy" you put into the sword depends on the fighting application of each movement. We will explore this as we learn the form, but we will especially drill into the body mechanics.

It's a difficult form to learn in four hours, which is why each attendee will receive a DVD. We'll try to memorize the choreography as I also drive home details on body mechanics and applications, then you can piece it back together through the DVD instruction.

Please contact John or reply to me at my email (ken@internalfightingarts.com) if you plan to attend.

A Life-Changing Book for All Martial Artists and Human Beings 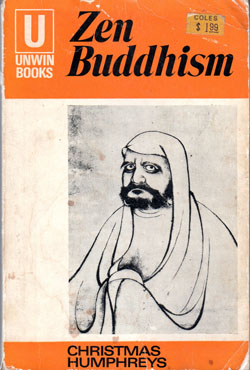 Until I saw the Kung Fu TV show around 1972. I started watching for the kung-fu fighting, but found myself drawn to the flashbacks -- the morality tales with the wonderful monks teaching Young Caine valuable lessons. The monks were Master Kan, played by the wonderful Philip Ahn, and the blind Master Po, played by Hollywood veteran Keye Luke (who played "Number One Son" in Charlie Chan movies in the 1930s).

The lessons were soothing and thought-provoking. When Caine questioned his own bravery, Master Kan said, "The deer runs from the lion. It is not cowardice. It is the love of life."

No one had ever told me about this stuff before. I found it much more peaceful, and a more loving way to look at the world and at other people, than the anger and bigotry that sometimes sprang from the people I had grown up regarding as authority figures. They were good folks, but full of the Threat of Christianity -- believe this or be tortured for eternity (oh, and by the way, it's a message of hope and love). And oh yes, anyone who doesn't believe what we do -- they're going to be tortured for eternity because they're guided by Satan. What an ugly concept.

I began hungering for more information about this strange Eastern philosophy, and when I was around 21 or 22, right after I began studying Kung-Fu, I found this book -- Zen Buddhism, by Christmas Humphries. He was a stuffy looking British prosecuting attorney and judge, but he had found Zen and became a leading authority. He died in 1983, but his home is now a Buddhist temple.

Have you ever experienced something you previously knew nothing about, and you "clicked" with it instantly? The book changed my life, and was a finger pointing the Way to a new way of thinking.

It isn't a religious book. It's more philosophy than theology. In fact, no invisible beings are mentioned because there's no way of knowing if God exists, so in Zen, that concept isn't something you spend mental energy on. No one can know, so you walk on.

As Humphries puts it, "Zen...climbs, with empty hands, from the level of 'usual life' to the heights of spiritual awareness."

A week ago, I discovered the book, still in my library with the $1.99 sticker on it from the 1970s. I started studying it again. Last night, I was telling my wife Nancy about the book. She looked puzzled. "What is Zen?" she asked. I found it difficult to explain and finally laughed. "He who knows does not speak, he who speaks does not know," I said.

Zen requires intuition to achieve enlightenment. You can't "think" your way to it. You have to set aside what you think you know, your labels and beliefs. Only then can you get a glimmer of enlightenment.

Zen uses humor, abstract concepts, and sometimes irrational statements to trigger enlightenment. One of my favorite stories from the book:

A man approaches the Buddha with a gift in each hand.

The man drops the gift from his right hand and steps forward.

The man drops the gift from his left hand and steps foward.

"Drop it!" says the Buddha and the man is enlightened.

Another good quote from the book - "Zen is a matter of experience. This statement, simple to express, is all that can usefully be said. The rest is silence, and a finger pointing the way."

Although some disagree, I see Zen and Taoist philosophy as being related -- maybe second cousins. I find Chi Kung (Qigong) a very good time to achieve silence, and open yourself to the Way. You can't feel the connection or the enlightenment by thinking about it.

There have been moments in the past few decades where I have had short flashes of some sort of enlightenment. It has been brief, like that of a camera flash, and it's gone just as quickly because when it flashes, you begin to think about it, and it lies beyond the intellect. Once you think about it, it's gone.

In those brief flashes, however, I feel that I have glimpsed the Truth. Despite the short duration of these insights, it is enough to let me know that when I found this book as part of my spiritual search as a young man, I took a fork in the road that most people I had grown up with didn't take, and I traveled a path very different from the path I was told to follow or else suffer eternal torture.

How ironic that this insight was helped along by a man named Christmas. I've never looked back.