Cyber Monday - And Forever - with our Tai Chi, Hsing-I and Bagua DVDs

I got an email a few days ago from someone in New York who has studied with a Chen tai chi teacher. He was learning the Chen 19 form and said "Your DVD is the best I've seen on this form."

When I began making DVDs, I wanted to actually teach -- not just show repeated movements. So each video goes into great detail on body mechanics and martial applications. You learn the movements but in a deeper way.

Beginning today on this blog, there is a Buy Two Get One Free deal plus FREE SHIPPING anywhere in the world. Buy any two DVDs and then email me (at ken@internalfightingarts.com) to tell me which single DVD you would like free. Sorry, but 2-disc sets count as one purchase and cannot be used as a free DVD.

Since Saturday, several people have taken advantage of this deal on my other two sites -- the membership site and my DVD sales site -- so I wanted readers of this blog to receive the same deal. It will be permanent.

I've had amazing feedback over the years on my DVDs. I offer a money-back guarantee if you don't like it for any reason. In 9 years of selling videos online, only one person has asked for a refund (on the Tournament Sparring DVD). Even people who have studied with Chen masters and grandmasters say they learn things from these DVDs that the masters haven't taught them.

That is as good an endorsement as I could ever expect.

So take a look through the list at the left. For most of the DVDs there is a sample video. It's a secure payment system. Buy two then email me with the free one.

It's not a bad idea to put this on your holiday gift list, too, if you have someone asking what you want. :)

Congratulations to Kim and Colin on their Promotions! 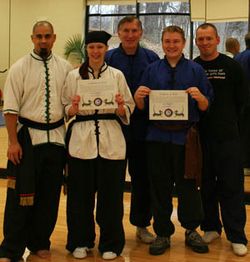 Kim Kruse achieved a black sash on Sunday. She has worked very hard for 4 1/2 years to get there.

Colin Frye became a second-level brown sash on Sunday. He started studying back when we were renting training space from Jazzercise in Bettendorf. He was in college at the time.

Approaching a Promotion to Black Sash 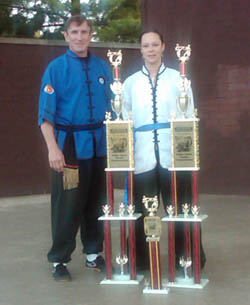 Traditional Chinese arts don't have ranks like Americans have become accustomed to. When karate and TKD became popular in the Seventies and Eighties, the colored belt system became something Americans expected.

Part of our culture is to set goals and achieve them. When I began studying the internal arts from Sifu Phillip Starr and his Yi Li Chuan system, there were four colors of sashes -- white sash (with three levels), yellow sash (three levels), and blue sash, which represented the advanced levels and the equivalent of brown sash -- it also had three levels. Then black sash.

I've been teaching since 1997, and I've had two students achieve black sash -- Rich Coulter and Chris Miller. The next one, I expect will be Kim Kruse, who tests next Sunday, November 20. The photo above shows some hardware she brought home from a tournament a couple of years ago.

There is also Internal Strength exercises to learn, Silk-Reeling, chi kung, fist posture applications, tai chi applications, bagua applications, chin-na, gun and knife defenses, and applications/sparring with all of the weapons. Students learn forms and also what each movement means in a self-defense situation. They learn to fight with each art. After all, that's why they were created, not for being one with the universe.

Tournament competiton isn't mandatory but encouraged, because putting your skills on the line in a public setting like that can teach you a lot about yourself.

All of our curriculum is centered around good internal body mechanics and the philosophical concept of "connecting" and being centered at all times.

Today, Kim had a private lesson as we went over some of the things she needs to refresh herself on for next week's promotion. It will be a gruelling 3 or 4 hours. It won't be easy on Kim, either. :)

One of the things I like most about having students reaching black sash is that it gives me the opportunity to work on the complete curriculum with them. With such a challenging curriculum, it's easy to go without practicing a technique or two for a while. So I've enjoyed each practice recently asking Kim "What do you need to go over?" Because I want to go over it, too.

Black sash is a rare achievement in our group. There is no schedule for promotion. You promote when you're ready at each level. If it takes a year to go from orange sash to green, so be it. You test when you're ready -- and when I think you're ready. Black sash takes tremendous discipline, heart, spirit, and dedication. It takes a good martial artist to reach it.

And when you do, it marks the beginning of your study. The levels up to black only represent the warmup -- getting acquainted with the basics of the arts. Now, the real study begins. There are no "secrets" remaining. There is no such thing as mystical indoor secrets. It's a matter of studying deeper and refining the body mechanics that make the internal arts unique -- and practicing it all thousands and thousands of times.

I look forward to it.