More than a decade ago, I attended a workshop by Mike Sigman in Minneapolis. I had been reading his material and watching his videos for a couple of years, soaking up his teachings on the ground path. After studying martial arts for over 25 years at that point, and the internal arts for over a decade, it was new material when I was introduced to Chen taiji through Jim and Angela Criscimagna. Because of Mike Sigman, and his use of internal terms I had never heard before, I sought out Jim and Angela and began studying with them.

One of the exercises we did at Sigman's workshop in Minneapolis was a drill using the ground to rebound force through the body to use in striking.

This is called different things in different arts. It is the backbone of "borrowing" energy -- when someone attacks you and you use their incoming force and "bounce" it back to them. I demonstrated this and discussed it in an article last October in Kung Fu Magazine.

It appears to be the same principle Bruce Lee used in his one inch punch.

In a nutshell, you press the rear foot into the floor and let the ground strength rebound through the body and out the hand (or shoulder or whatever you're using). This requires a LOT of practice. It also requires relaxation, dantien rotation, and a whole-body connection that carries the ground to the hand (or attacking part). In the past, we have used this to break boards. It's deceptive because you don't wind up, you don't cock the shoulder and you don't drive the arm forward.

You simply use proper body mechanics to bounce the ground through the hand.

I was reminded of this a couple of weeks ago by my friend, Evan Yeung. He is quite a student of the martial arts -- he studies bagua and chen tai chi, also karate and contact flow through the Guided Chaos folks headed by John Perkins. I realized that even though this bouncing or rebounding or borrowing energy is part of our arts (Taiji, Hsing-I and Bagua), I hadn't isolated the practice of it in a couple of years.

Stay tuned -- in a couple of days we'll tape a video demonstrating this. 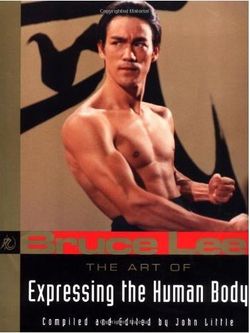 I had the pleasure of interviewing John Little by phone this morning about his interest in martial arts and his experience as the only person who has had complete access to the writings, notes, and letters of Bruce Lee.

John and I have a few things in common -- among them a respect for Bruce Lee that was triggered when we were young, and a realization that martial arts skill is the result of hard, physical work, not mystical nonsense.

The entire interview runs around 38 minutes. Listen to the complete interview with John Little by clicking this link. You may also download the interview to your computer by right-clicking on the link and then select "Save Target As...."

I appreciate talking with a man who has done so much to enrich the lives of all martial artists.

A Special Place for Qigong and Zhan Zhuang -- Standing Stake 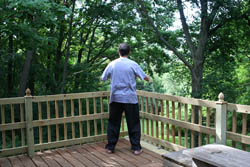 I've been interested in the concept of being "one" with nature (or the Universe) since the early Seventies. I was first inspired by the Kung-Fu TV show -- fascinated by the "flashbacks" and the morality and philosophy of the Shaolin monks.

"Standing," as it is often called, is the most important exercise in Taijiquan. It's also known as Zhan Zhuang. Translated from Mandarin, that means "standing like a post."

When Nancy and I moved into our new home a month ago, I found an ideal spot for Standing Stake. It's in a corner of my deck, surrounded by trees with a deep yard below. Yesterday morning, a young buck was at the edge of the yard below, eating leaves from low-hanging trees. His antlers were pretty short. He stopped to stare at me for a moment, wondering if I was friend or foe, then lost interest and began munching again. On the tree a few feet away, a chipmunk ran up and down.

It's not difficult to feel "one" with nature here.

Standing Stake is useful for a lot of reasons. I use it as a way of maintaining my center with all of the things going on in life -- moving a month ago, work, sometimes uncertain health issues -- Standing is an excellent way to return to a connected state and then try to maintain that feeling throughout the day.

Many benefits have been attributed to qigong. Many are unfounded in real science. In my experience, Standing and other qigong exercises help you manage stress and center yourself in a hectic world. If you manage stress, you help your body function and heal better.

To be an outstanding internal artist, a small part of each day should be devoted to Standing and qigong. It doesn't have to be a long period -- sometimes five minutes is plenty -- but hopefully you can find time each day to maintain your center. The location isn't important. The corner of a bedroom will do just fine. The important thing is to invest the time.

It's an investment in yourself.

I began practicing qigong in 1987, after being introduced to the practice by Sifu Phillip Starr. In 1998, I began studying with Jim and Angela Criscimagna, and they introduced me to Standing Stake.

On July 4, 2008, I publicly launched my online internal arts school at www.internalfightingarts.com. There were around 100 video lessons relating to Chen tai chi, Hsing-I Chuan and Baguazhang.

Three years later, there are more than 450 video lessons, plus e-books, audios, and other material.

In the past three years, hundreds of members have joined. A few have been with me from the very beginning.

I've changed my views of the school over the past three years. It began after people had sent me emails over the years, asking how they could study these arts when there weren't any teachers in their remote areas. I felt I could give them what they needed.

With my TV news background, the ability to edit videos well and tell a story, I thought I could break down movements and clearly explain them, including an emphasis on the internal body mechanics that make the movements powerful and unique in the martial arts.

Now, every week, I get emails from people telling me that the videos I'm producing are the next best thing to personal instruction, and that's my goal. No one will ever be able to master these arts by studying online. But they can learn techniques, principles, and a lot of mechanics that many internal arts teachers don't know or simply won't teach.

I want people who see my lessons to think, "Oh, so THAT's what this means." I had one kung-fu teacher contact me and tell me he was halfway through one of my video lessons and became angry that his teacher had never taught him this material.

And since I don't have to "dumb down" the material for the mass public who might join a bricks-and-mortar school (I don't have to worry a lot about rent and utilities for my school) I can stay true to the arts and pass along the knowledge I've gained over the years.

This has been a wonderful experience and I plan on continuing until there are over 1,000 video lessons, covering each art and their forms in-depth.

If you haven't tried it out, try it. You get the first two weeks free and you can cancel anytime. It's a 100% honest website.

Here's a sample lesson of an tai chi video lesson from the online school:

My New Kung-Fu Room Has a Lot of Practice Space 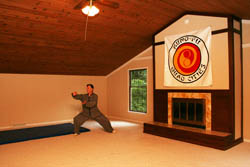 Nancy and I moved into our new home a month ago. It has been a very busy month -- moving and sorting -- and we still have a lot of boxes. We had a mover do most of the heaviest lifting, but still -- it has been a tough month.

The day of our move, I expected it to nearly kill me. Working with less than one complete lung, it was very taxing. And seeing the younger guys lifting all the heavy furniture and boxes made me want to get in there, too. But those days are gone.

The next morning, I expected to wake up and feel horrible. But instead, I've been breathing better since the move. It almost feels as if my right diaphragm -- which has been paralyzed for 2 years -- has sparked back to life. I'm able to do kung-fu longer and going from floor to floor in the new house hasn't been a problem.

I may never get the left lung back, but heck, if I have one complete lung, it's more than I've had the past two years. I'll take it.

It still took two or three weeks to get the kung-fu room in shape. Now, the old banner from our school in Bettendorf is up and it's ready for practice. The wall you can see in this picture will be the backdrop for video lessons for the online school. Plus, there's a great area for videos in the yard, with a beautiful wooded backdrop. Kim, Chris, and Colin came over a week ago and we shot some bagua applications. The new lessons are appearing on the online school and will be in a new DVD.

It's a dream come true to have a room like this in my home. Nancy is amazing to want this house so badly -- for one reason, so I could have a good practice room. It's cool to have a wife who is behind you 100%. There's enough space in the kung fu room to work with swords, staffs, and I'll attempt the spear form this weekend and try not to hit the light. It should work just fine.

So if you're in or near the Quad Cities, come over and practice.