Bagua and Taiji Unbalancing Technique Against Opponent -- the Hook Step 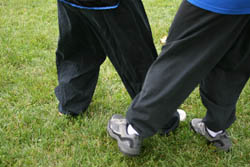 One of the effective techniques used in Bagua and Taiji to unbalance an opponent occurs when the opponent steps toward you, or you step toward them.

In Bagua, this is called by some the "bagua foot." It's a hooking step that sets you up to apply pressure on your opponent's calf and cause them to lose their balance. 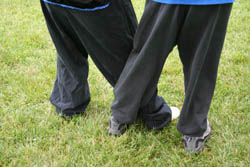 In the first photo, Kim Kruse (on the left) takes a step toward Colin Frye. She's stepping with her right foot. He hooks his left foot behind her right ankle.

In the second photo, Colin presses forward with his shin, applying pressure against Kim's calf. This causes her left shoulder to move backward and to the side. 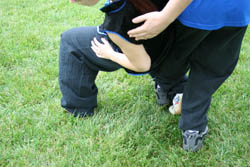 In photo 3, Colin has taken advantage of the turning of the shoulder -- he pulls on the shoulder and Kim falls backward.

This is a great internal technique. Remember, the idea of internal kung-fu is to unbalance your opponent and take advantage of the window of opportunity that becomes available when they lose their balance.

You remain centered -- your opponent loses their balance. This is your goal mentally and physically when you are attacked.

Remember to sink your weight through this technique.

When you hook your foot behind your opponent's ankle, it also sets you up for a "split" technique where you kick the opponent's foot while exerting backward force against the opponent's torso. More about that one in another post.

Applications - The Similarities Between Karate and Tai Chi 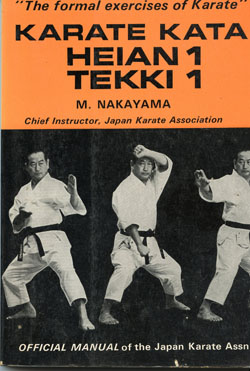 The book that I found in my martial arts library from 1974, teaching the movements of two basic karate forms (kata), is interesting to read. Some basic applications are included, and I'd like to add an application to one of the techniques.

In these books, a simple view of karate forms was shown in great step-by-step photos. For those of us caught up in the Bruce Lee craze in 1973 and 1974, there was really no distinction between arts. Karate and kung-fu and Taekwondo all seemed exotic and exciting -- we didn't really focus at all on the differences between these arts. And I had no idea how much I would be drawn to the internal arts.

One of the katas demonstrated in this book is Heian 1 -- the other is Tekki 1. In this form, the teacher does a move showing him defending against two attackers (photo 1), bringing his foot up and inward (photo 2), and the application shows him evading a kick. 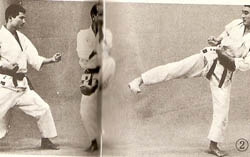 This is a perfectly good application. Please forgive the crease -- the photo was placed between pages. The application itself is obvious and it's level 1.

There are some good karate and TKD teachers around who teach beyond the basic applications. They are few and far between but there are a couple here in my area (Jai Johnson and Hector Lareau, for example).

So let's go to the next level with this application.

Remember, level one of a movement is basic -- a punch is a punch and a kick is a kick. A step is a step. 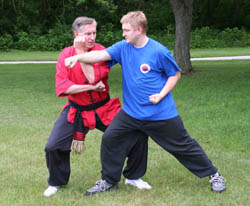 Let's look at level two of this movement.

An attacker punches. You block with the forearm (photo 3) and position your leg behind the attacker's leg.

Then you kick your foot up and sweep your opponent (photo 4).

One of the main goals of the internal arts, particularly tai chi, is to unbalance the opponent, then take advantage of him when he's unbalanced. When the opponent punches and 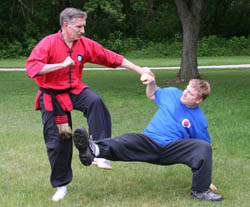 you deflect it, he is easier to unbalance at that moment. Here's a hint -- your foot doesn't have to rise like it does in the photo, and it always helps to exert opposite energy on the upper part of his body.

There are many similarities between karate and tai chi, karate and Shaolin, etc. It's well known that one term used for karate was "China Hand" because of the influence of kung-fu masters on the development of karate. The body mechanics of tai chi are far different, but similarities exist if you look for them.

Take a look at the forms (kata) that you do in your art and see if you can find movements that could be sweeps hidden in the form. It's possible that your teacher doesn't even know, but that shouldn't stop you from seeing deeper.

I began studying martial arts in 1973, during the explosion that Bruce Lee created with "Enter the Dragon," "Fists of Fury" and "The Chinese Connection." I finally took my first class on September 20th from a teacher of Shaolin-Do, Grandmaster Sin The in Lexington, Kentucky. I studied with him for about 3 years and earned a brown belt before exploring other systems such as taekwondo, T'ien Shan Pai, and eventually the internal arts.

I also began buying martial arts books that year, and some of the only books on the market were karate books.

Two weeks ago, when I was packing as Nancy and I prepared to move to our new house, I re-discovered many old martial arts books, and I decided to review them and study them again to see what I could learn that would apply to the internal arts, or would increase my knowledge of martial arts in general.

Even though I read many of them when I first bought them, it will be interesting to look again with the eyes of a martial artist nearly 38 years down the road. 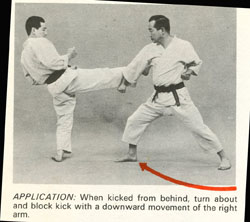 In the next few weeks, I'm going to look through these books and offer posts on what I find, and how movements can be applied in more creative -- and sometimes brutal -- ways that aren't included in the books.

It's like finding an old friend -- these old books have been with me through 29 moves in Kentucky, Ohio, Nebraska, Iowa, and Illinois.

When you study the internal arts as I do, believing in alternative medicine -- acupuncture, herbal medicine, healing hands, etc. -- is part of the culture. Those of us who demand proof and scientific evidence for the effectiveness of such treatments are often met with hostility. I studied acupuncture for two years and other Traditional Chinese Medicine. It is interesting how it works for some pain management issues in one person and doesn't work at all in another.

Belief in alternative medicine theory is a lot like religion. If you question someone's religion and ask for real scientific evidence, the conversation can turn negative very fast.

Now, here is a news report that indicates in some cases, the medicinal truth behind alternative medicine isn't as important as the belief by the patient that it will work.

Read this story from CNN Health.