What do we do about the image of Taijiquan when the world believes its a slow-motion exercise for health and meditation designed for the elderly?

How do we show it for what it is -- a powerful martial art?

One thing that would help is for Tai Chi teachers to stop pretending it's mystical -- that you can control a motivated, violent adult with your mind and with something vague called "intent."

The principles he describes are great, but as he demonstrates, he uses a partner who is willing to fall in dramatic ways so the master looks good.

The problem is -- it doesn't work like this, and any decent martial artist who sees this knows it's a crock. Anyone who has ever fought another human being knows none of this works the way it does here.

Here's another video that shows the fantasy of Tai Chi -- not the reality. It involves another famous Wu style master, Ma Yu Liang. His partner in this video is being completely dishonest about what's going on here. It broke my heart the first time I saw this, because when I read about Ma Yu Liang in T'ai Chi magazine over the years, I expected to see skill. Instead, I see the type of thing that fuels all the fantasy-seekers in the internal arts who want everyone to think they've tapped into some mystical universal Force.

You have to ask yourself, "Why would a master put his reputation on the line with this type of demonstration?"

It's no wonder regular martial arts have lost the popularity battle to MMA, and this is one of the reasons the internal arts have never been as popular with fighters as karate, taekwondo, and other arts.

Until we get real about the internal body mechanics and great fighting techniques of Taiji, it will never be recognized for the great internal fighting art that it is. And if you're studying with a teacher who can't show you -- find another teacher.

If you want to see some good Tai Chi tournament fighting, here is Chen Ziqiang (in the black and white uniform) using internal mechanics on Chinese TV in televised matches. This is real Taijiquan. Notice how he unbalances his opponent with various techniques including kao. He's demonstrating some of the principles that Wang Peisheng discuss in his video above, but Chen Ziqiang is a real fighter who doesn't indulge himself in make believe.

Let's publicize more of this and call the fantasy-seekers out for ruining our art.

A New Room for Kung-Fu Practice at My New Home 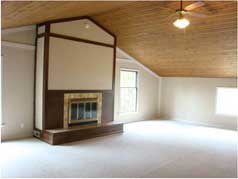 Nancy and I have bought a new home and we're moving during the next week. It's in a Moline neighborhood called Wildwood. We're very excited. One of the main reasons I'm excited is because of all the space to practice kung-fu.

This picture is of my new kung-fu room. It's big enough to do Laojia Yilu without having to stop and back up. Vaulted ceilings make it perfect for practicing with the staff. One wall -- the one on the left not shown here -- is where I'll do a lot of instructional videos for the online school. I'll be putting up the usual photos, newspaper articles through the years, Bruce Lee posters (what's a practice space without Bruce Lee for criminy's sake?), and other decorative items. 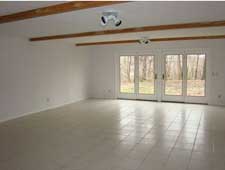 The back yard has a beautiful, flat area with great trees as a backdrop -- another good place for practicing and shooting videos. Looking through the back doors in the basement (left) you can see the area. This photo was taken before the leaves began filling it out.

The most amazing thing that has happened to me in my life is meeting Nancy. As we started looking at homes during the past year, one of her priorities was to find a home with enough space for kung-fu. Now THAT is a good woman. :)

Moving is difficult, but we've decided this is our final one. We sold our home in Moline in 2007 to move to Tampa for a job that didn't work out a year later. We've stayed out of the housing market since, as I had a near-death experience that took me a long time to recover from, but recently we knew that housing prices had dropped to a point that made a very nice home affordable.

If I can just get through the next week, I look forward to generating a lot of new material, videos, e-books, and other stuff very soon.