Home Archives Profile Subscribe
How Long Does It Take to Achieve Tai Chi Skill?
No Pain, No Gain -- and No Quality in Your Taiji

If You Don't Practice the Type of Qigong I Practice, You'll Die 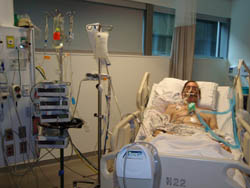 I've been through a lot during the past three years. The onset of atrial fibrillation, three procedures to try to fix it, and the horrible side-effect, which was the closing of my left pulmonary veins.

The same procedure that caused my pulmonary veins to shut down also paralyzed my right diaphragm. So I'm living -- and doing kung-fu -- with 2/3 of one lung.

It can be a challenge.

For over a week at Cleveland Clinic in late 2009, I was on a ventilator. The photo above is from that time. I nearly died twice. My weight dropped from 206 pounds to 157. I lost a lot of muscle. I looked like a concentration camp victim. I was determined to recover and to do kung-fu again -- tai chi, hsing-i and bagua. It has been a struggle. Even though I'll never be able to use my left lung, and the right diaphragm is still paralyzed, I'm determined to continue my progress in the internal arts.

So imagine my reaction when well-intentioned but very misguided people send me emails telling me that the reason I developed heart and lung issues is because I was doing qigong wrong.

Last fall, I went to Mayo Clinic for a second opinion. Doctors were shocked that I was in the latest issue of Kung Fu Magazine. They were stunned that I was still teaching and practicing taiji, xingyi and bagua. One of their top cardiologists stopped when I cracked a joke and said, "I find it amazing that you have a sense of humor after what you've been through."

He also told me that I was alive because of the physical condition I was in when the crap hit the fan. The photo below is from last year -- 2010 -- practicing fighting applications for Hsing-I's Dragon form with Chris Miller. 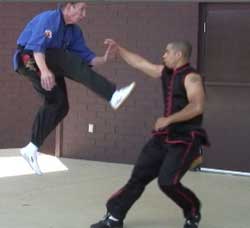 So let's get real here, and let's move beyond the fantasy that exists in the minds of so many chi kung practitioners.

I don't see any qigong masters on this list. Do you? They are typically little old women who probably haven't exercised in 40 years and wouldn't know what qigong is.

Can you name a chi kung master who was born before 1911 and is still alive? I can't. So why are they not still here, thriving and immortal?

Because chi kung is a way of managing stress. It's a way to find mental balance and remain centered in a hectic world. It has some health benefits due to its stress-management aspects, but you can still get cancer, you can still get MS, and yes, you can still get atrial fibrillation, even if you practice qigong. It doesn't lower your cholesterol and it doesn't heal congenital defects.

In the email I received yesterday, this well-intentioned but misguided man told me that the qigong that he practices would have prevented my illness, and obviously, the tai chi that I practice is too "yang," or hard. It was a slap at Chen tai chi, I suppose.

I replied to him that he was a good person, but he was missing the point.

After everything I've been through, I'm still practicing and teaching. Doesn't that mean that my chi is strong, and perhaps I've been doing all the right things?

I didn't get a response.

Qigong is like religion in many ways for a lot of people. If you don't believe what I do, you'll go to Hell. If you don't practice the qigong I practice, you can't be healthy.

Let's get real. All chi masters who were born more than 90 or 100 years ago are dead now. Just like everyone else.

And the oldest person in the world is probably a little old lady in a nursing home in France. You can look it up.