Taiji Training Equipment -- The Value of a Mirror in Tai Chi, Hsing-I and Bagua Practice 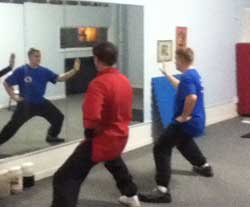 Last week, I spent some time working on my movements in front of a large mirror in my basement. I watched closely while practicing "Step Back Whirling Arms," a movement that's seen in most Chen taiji (tai chi) forms. I wasn't satisfied with what I was seeing, and I could feel that my body mechanics weren't quite right -- it wasn't "flowing."

In a short time, I saw what I was doing and I adjusted accordingly. Suddenly, it felt much smoother. The spiraling movement flowed though my body -- from the ground, through the legs, the dan t'ien, and continued through the shoulders, elbows, to the hands. It really did look like I was swimming backwards, and that's one of the qualities of the movement.

In the winter months, we rent space in John Morrow's school in Moline, Illinois, for our practices. There is a large mirror in part of the room. I often take students over to practice so that we can watch ourselves in the mirror.

It's like pulling teeth to get students to watch themselves in the mirror. They watch their hands, their feet, but even though I say "watch yourself in the mirror as you move," I sometimes have to repeat it several times, firmly, before they do.

The mirror is a valuable tool -- almost as good as video -- to help you critique your own movements, pick them apart, and find out if your movement in reality matches what you think you're doing. Usually, it doesn't, but you don't know unless you can see it.

So in the Thursday night practice, Colin and I got in front of the mirror (the photo above). I got him to watch himself, and we isolated movements in the Chen 38 form (a shortened version of Xinjia Yilu) and practiced the movements like silk-reeling exercises. Using the mirror, I showed him how the body mechanics come together -- starting with the ground, maintaining and moving peng as the strength spirals through the body.

We practiced over and over and he had several "aha!" moments. At the same time, I was also watching my own movements and working on my own mechanics. At one point I could see that my shoulders weren't part of the silk-reeling, so I relaxed a bit and it not only felt better, it also looked better.

If you don't have a big mirror available, use one at your local fitness center or Y. If you're not a member of a fitness center, the next best thing is a flip camcorder. You can buy one for under $100 on ebay. Have a friend or spouse videotape as you do your movements. Watch the video carefully. Try to spot where your peng breaks -- where you are too stiff, too limp, not lively and spiraling.

In my online school, one of the things I offer is video coaching. Some people shoot video of themselves, then put it up privately on YouTube for me to critique. I'll shoot a reply video, demonstrating what they need to work on. It's the best we can do without seeing each other face-to-face.

For a few years when you begin these internal arts -- tai chi, xingyi or bagua -- you don't even know enough to see when you're making a mistake. I remember when my teacher, Jim Criscimagna, would correct me on a movement and it looked fine to me. But when I practiced it his way, I realized what I was doing wrong and after a few years, I was able to see it when other people made the same mistake. But it took a long time. The internal arts take a LOT of training and repeated correction.

But even if you don't have a teacher to critique your video -- if you shoot video of yourself, or watch yourself in a mirror, just be honest about your skill. Remember, you're not watching to admire yourself. You're watching to catch your mistakes. And you're making them, whether you are aware of it or not.

The Fantasy Continues - Why Do People Believe in the No-Touch Knockdown?

People believe a lot of strange things. There truly is a sucker born every minute. Con artists know this, and that's why there is no shortage of con artists.

In martial arts schools, some instructors aren't satisfied with developing martial skills. They want more. They want people to see them as supernatural.

So they tell their students they can knock them down without touching them. Then they put their students in front of them, and the student -- who has now been told what he is expected to do -- plays along so his teacher doesn't look bad.

My friends, there is no such thing as the no-touch knockout. No human being can knock you down using only his "energy." He must use a weapon of some type.

What amazes me also is the willingness of "teachers" to put this garbage out for public viewing. Here are two more videos that are on YouTube. The first is by a student of George Dillman, who has become a joke after a long martial arts career.

Below is another one. I offer these bozos the same thing I've offered chi "masters" for the past ten years. If they can do this to me, I'll give them $5,000 on the spot. They have to agree to allow the media to attend, and they will agree to reimburse me for my travel costs if they fail. Since my challenge was first made 10 years ago in Inside Kung-Fu magazine, no one has taken me up on this offer. Well, of course not. They know I won't play along. I will reveal them to be as dishonest as these videos.

To any student who comes across a teacher who makes this claim, I urge you to run out the door and not give him a penny of your money. Find a teacher who will teach you something real, not more of this crazy fantasy.

The Road Back -- Why I Move, an Article in an Online Health Newsletter

The past two years have been full of challenges. My kung-fu might be the reason I'm alive, according to some of my doctors.

Last weekend, I was asked to write my story for a regional online health newsletter. Here is the link (and forgive them for saying I'm a "master" -- I'm not a master, just an enthusiastic teacher and student). :)