The Hazards and Myth of "Hard" Training

I ran into a kung-fu guy that I hadn't seen in at least a year. He's young (around 30), strong -- and I asked where he had been. He moved to Chicago a while back and he told me he had started training with a martial artist who "trains real hard" with his students. He said that as if it was something to be proud of.

How's that going, I asked. He replied that they trained so hard, he had broken his foot and fractured several ribs.

He hasn't trained in over a year.

There is a big segment of the population now -- the ones who would have been training in kung-fu, karate and TKD schools back in the 1970's -- who now believe that the only "real" martial arts are the MMA type that beat the crap out of you.

Let me make a point that I've made many times. You don't have to hurt someone, or be hurt yourself, to learn how to be a good fighter. It's a myth fueled by youth, testosterone, and frankly, being a dumbass.

That doesn't mean there isn't a certain amount of pain you have to go through. "Eating bitter" is a Chinese saying that means that you have to endure a certain level of discomfort if you want to build skills. And it's true that you just might come away with broken bones or torn ligaments if you really go toe-to-toe with talented Tai Chi fighters or others.

But if you think being pounded makes you a man, you'd better enjoy it while you're young, because repeated abuse will take its toll. Your foot might heal now, and you might get back out on the floor and be able to perform, but in 20 years, your middle-age will be greeted by arthritis and other ailments. You pay a price when you take abuse.

A few years ago, a former student came by the school to visit. He's a big guy and he was a good fighter. We padded up and started sparring. I walked right into a punch that should have knocked me out. I've never been hit that hard in my life.

I backed up, shook my head clear, and continued sparring. When we were done, I realized why I didn't need to be hit that hard every day to realize that I can take a punch. There's no doubt that I can take a good one and keep going. It also happened in the full-contact Toughman Contest I was in at age 38.

You get hit in the head like that often, you pay a heavy price after a while.

Not to mention, when you break bones, it has a big impact on your training. The young guy I was talking to from Chicago hadn't trained in over a year. Once you take a couple of months off to heal, it can snowball.

In my classes, we feel pain occasionally -- you HAVE to when you're doing chinna and takedowns. But I keep a control over the level of contact and abuse. It doesn't do me any good as a teacher if my students are broken and can't practice. And I've had students who have successfully used their martial arts in real life.

One more time. You don't have to be hurt, or hurt someone else, to be a great fighter. 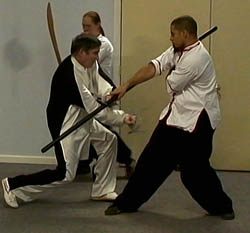 If you're going to learn forms with weapons, you should learn how to defend yourself with that weapon.

When martial arts were created, the gun was not yet a weapon. Warriors used sticks, staffs, spears, swords, and other weapons.

In our arts, we learn forms that include the staff, straight sword, broadsword, spear, and elk horn knives. We also practice single and double sticks, although they are not part of our internal curriculum.

Here's a great exercise -- and for this, you should pad up or use foam weapons. It's very important not to thrust at someone's face, and if you're going to allow non-contact thrusting to the face, everyone should have head gear that covers the face and goggles for the eyes. I've never believed in hurting anyone, or being hurt, just to learn martial arts. 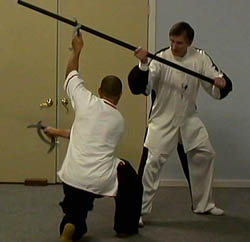 This article shows photos taken last week at our practice. Chris Miller (black sash), Kim Kruse (brown sash), and I took turns in the middle and had to defend and counter while we were being attacked by weapons. Chris and I chose the Bagua Elk Horn Knives as our weapons to defend ourselves. Kim chose the broadsword.

The most difficult part of learning a weapon, other than the internal body mechanics required in our arts, is how to use it against an attack. To recognize the incoming attack, deflect or block it and counter-attack are the skills you're trying to develop.

With the Elk Horn Knives, one is used to defend while the other is used to counter, usually with a cutting/slicing action but sometimes with a stabbing/thrusting action. 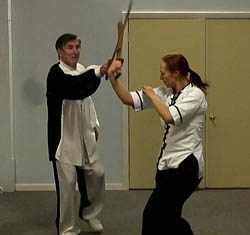 With weapons, as in empty hand combat, you have to be fast on your feet, and against multiple opponents, as we were practicing Thursday night, it's a good idea to get your opponents on one side of you.

You start by having someone attack. The person in the center has to defend and counter, and then turn to the other attacker.

It teaches you a lot about how well you can use a weapon. Winning a weapons form competition is nice, but if you have no idea how to use it in self-defense, your form will be empty of intent. Remember, in the internal arts, intent does not mean anything mysical, and it doesn't mean you're focusing on "chi." Intent is the meaning of the movement, and the body mechanics required for the movement. All movements are fighting applications. This is why all the weapons DVDs that I make have detailed instruction not only on body mechanics, but also fighting applications.