I've made some outstanding friends because of the martial arts. One of them is a high-ranking black belt in the Shinkyudo Karate Association. His name is Dan Gray.

Dan was a college student when I met him in the mid-90's. I was in my 40's and we met while competing against each other. The first time we met, he seemed like a nice young guy and when we sparred, he kicked me with a surprising stop kick to the solar plexus that had me gasping for air for a moment. He beat me in that match but we kept congratulating each other when the other would score a point, slapping each other on the arm between points in a friendly way -- it was a very positive match.

The next time we competed against each other, we talked more and again, we fought for first place. In fact, we've probably sparred a dozen or more times for first place in tournaments around the area. 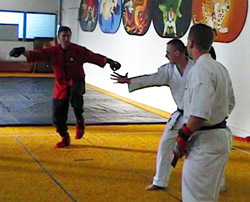 By the third tournament, we started joking around and having a lot of fun. We were very serious about our sparring, but we enjoyed each other just as much, and we began making the judges and the audience laugh by taking "kung fu" poses as if we were in a bad Chinese movie.

I've posted four pictures here from a tournament about 10 years ago -- probably 2000 or 2001. In the first photo, I'm striking a pose like in the 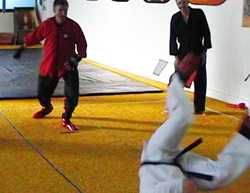 Karate Kid movie as the center referee tells us to resume fighting.

In the next photo, Dan actually rolls across the mat like a kung-fu action hero. You can see me and the corner referee smiling. He hopped up and we resumed sparring.

The third photo shows me getting him with a hook kick, and the final photo shows the hug at 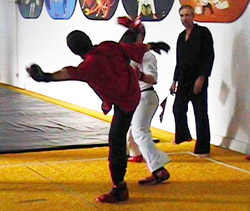 I barely won that one, and it could have gone either way. Usually, it depends on what the judges are able to see as much or more than the points that are actually scored. The fourth photo shows the end of the match -- no matter who wins, the friendship is intact.

We went to a Chicago tournament together around 2000 and had a great time. We've competed against each other many times since -- 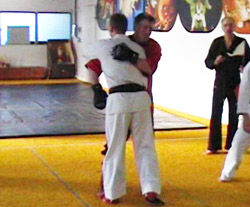 he would win one, I'd win one, and we'd go back and forth. His skill and speed, and outstanding techniques, forced me to practice harder so I could compete as I entered my 50's. We has shown that it's possible to be friends and have a lot of fun even during the heat of competition, and I believe it has been appreciated by the judges and by the audience.

Earlier this year, after encountering serious health issues in 2009, I wasn't able to spar at John Morrow's tournament in May. It was frustrating watching my friends spar and having to serve as a corner ref. I don't like the thought that I may never again be able to step in the ring with Dan.

Dan is one of the people who make the martial arts a positive experience. His brother, Aaron Leisinger, sister Chelsea, and others in the art, including Frank Martinez and Samantha Roach and Craig Schaul, are examples of the type of martial artist everyone should know and aspire to be.

I just wanted to use this post to salute the folks in the Shinkyuko Karate Association, and especially my friend Daniel Gray.