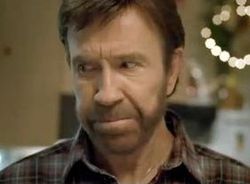 I love Chuck Norris jokes. A new one I heard -- Chuck Norris is the only man in history who has beaten the odds. With his fists.

Chuck is in some new TV commercials -- in Czechoslovakia -- where he drives his new image home without speaking a word.

Take a look at the Chuck Norris TV commercials here.

Chuck got his big break in the movies through Bruce Lee. Their fight scene in the Rome Coliseum in "Way of the Dragon" was classic. It was a few years later that Chuck made 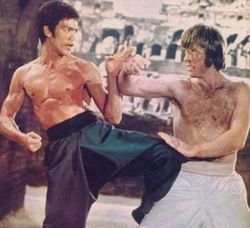 his first starring role (I think his first movie as a leading man was "Breaker Breaker").

Bruce's daughter, Shannon, is keeping her father's legacy alive now, and jealously guarding it, as she should.

did you see this one:

the woman said her﻿ son is ice skating for the first time and whether chuck could take﻿ picture of them. ice skating in czech has same pronunciation as Bruce Lee. that's why he said he is chuck.