I met a wonderful group of people in East Lansing, Michigan yesterday. Sifu Doug Lawrence sponsored me for an Internal Strength workshop. For six hours, we drilled on what I've identified as six key skills for the internal arts -- the ground path, peng jin, whole-body movement, silk-reeling, dan t'ien rotation and opening/closing the kua.

Sifu Lawrence teaches Yang tai chi, Hsing-I and Bagua. He knows what he's doing. I was really happy to meet an instructor like Doug -- open-minded, constantly researching, trying to get better and searching for good information. I could tell within a few minutes that he is an outstanding teacher. 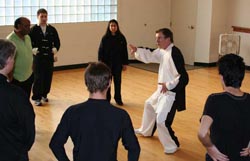 We started with standing stake and I corrected some posture issues. From there, we worked on the ground path, peng jin, and then silk-reeling exercises. All of the exercises we did can be found on my Internal Strength and Silk-Reeling DVDs.

The foundation of internal strength is the ground path and peng jin. Chen Xiaowang likes to describe this in automotive imagery. He says imagine a car, lifted off the ground. You can race the engine but nothing happens. Put the car on the ground and it has power.

One of the difficult concepts for beginners is connecting the flow of strength through the body. This isn't mystical -- it's a physical skill and requires years of practice. The whole body has to move in a connected way, but it begins with the ground, spirals through the body, is directed by the dan t'ien as you open and close the kua. One of the most common mistakes I see is when people turn the hips instead of the waist (dan t'ien area). Another common mistake is a lack of awareness of the kua. Moving into the kua -- opening and closing the kua as you move -- is crucial.

I encourage anyone living in the Lansing, Michigan area to study with Sifu Lawrence if you're interested in the internal arts. He teaches at the Hannah Community Center near the Michigan State University campus.