Home Archives Profile Subscribe
An Email from the United Kingdom
Top 10 Signs You're in a Bad Tai Chi, Hsing-I or Bagua Class

Bill "Superfoot" Wallace and the Science of Stretching 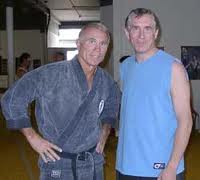 Nancy and I were invited to our friend John Morrow's house last night to have dinner with Bill "Superfoot" Wallace -- undefeated world full contact karate champion and trainer of both Elvis and John Belushi. I didn't realize until last night that Wallace is the person who found John Belushi dead, when he showed up at Belushi's room at an L.A. hotel for a morning workout.

Today, John hosted Wallace for a workshop at his Moline kung-fu school. It was a great workout -- stretching, kicking, punching, and combinations. I've gone over all this material with Wallace before, but refreshers are always a good idea.

Almost two months ago, I attended a Bill Wallace workshop in Las Vegas. It was the third or fourth time I've trained with him (if you Google Bill Superfoot Wallace, and click on the link that shows photos, the photo above of me and him in 2001 is among the photos that are shown). After discussing his stretching exercises on the online school, I was looking forward to asking him a question:

What do you think of the new research that indicates stretching causes you to lose strength in your muscles?

I asked him during dinner last night, and he explained it this way:

This builds flexibility, according to Wallace. When a muscle is stressed, it contracts. When you relax it, you're more flexible and fast. Muscles were made to pull. The biceps pull your arm in for a curl. The triceps pull it back out.

So what you need to have are muscles that relax, and that requires some work.

The best time to stretch, he says, is just before bed, because you get the muscles to relax and then you go to bed, where the muscles continue to relax all night (especially if you're my age -- when I was younger I might not have "relaxed" in bed as much as I do now). :))

Bill Wallace is funny and an expert at what he does. Besides flexibility, what he teaches is what I've used in sparring for almost 37 years -- misdirection. Make your opponent think you're going somewhere, and go somewhere else. It works.

It was good to see him and work out with him this weekend. He isn't internal, but he's a lot of fun.

He was a very interesting person to meet. I look forward to future seminars with him when I get the chance.