The Martial Arts Supershow is really geared toward martial artists who own schools. I have a small group of students I train with, but I don't have a typical "school" anymore. I didn't like running a school.

In 1975, I got into the news industry to be a reporter and to be able to write for a living. By 1989, I had become a news director, a manager in charge of the newsroom. I had to answer for every photographer who dented a news car, and I had to deal with anchors who threw temper tantrums or wouldn't show up to work on time like the employees who weren't stars. That's not what I got into news for, so in 1997, I left the business.

The same is true for me when it comes to martial arts. I always dreamed of owning a school, but once I did, I had to worry about making money, paying the rent and utilities, dealing with students who skipped a few months on their payments, and simply having to accept students who weren't serious.

Looking through the booths at the Supershow, there are good products for school owners and some that I find almost offensive ("buy a complete curriculum from me"). 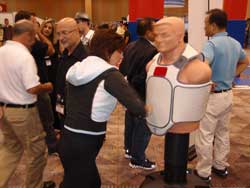 One of the good booths is by Lajust. They've developed a vest that you can put on a Bob training dummy or any standing heavybag. The vest is wirelessly connected to a receiver and a laptop. When you strike or kick the bag, the laptop shows how much power you've generated.

You can use this to judge how strong your strikes are and train accordingly.

I like it. The price tag was close to $2,000 (including the vest, receiver and laptop with software) if I understood him right, but apparently it's a big hit with students and I can see how it would be a great training tool.

The Supershow is sponsored by Century. I doubt that I'll attend another one -- I don't intend to have a typical school again -- but for those who do, and have to worry about making the overhead and making a living, I suppose this is a good event.

My next post will focus on the dumbest booth of all time -- and unfortunately, it's the closest thing to the internal arts at the entire Supershow.