A Morning Workout with Chen Ziqiang 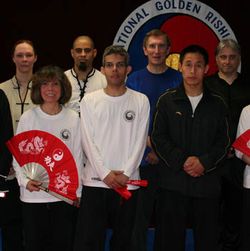 This is the Chen family's world. The rest of us just live in it. Each time I train with a member of the Chen family, it's like trying to go one-on-one with Michael Jordan. You experience people who are at the top of their profession.

I got up at 2 a.m. and got to Master Han's school in Skokie, Illinois, a little after 5:00 a.m. Master Han arrived with Chen Ziqiang around 5:45 and at 6, he did a 2-hour workshop on the Chen fan form. This isn't the same form that Zhu Tiancai does on his DVD. This is the original Chen Village form. I've never studied the fan before, so it was an opportunity to add a new weapon to my list. I've always considered the fan to be more of a woman's weapon, but the form is more challenging than I expected, and I rubbed a hole in my right index finger opening and closing my steel-pronged fan.

The photo here is cropped -- in the back row from left to right are my students Kim Kruse and Chris Miller, and I'm in the blue, sweat-soaked t-shirt behind Chen Ziqiang. You pronounce his name "Zih-john").

He went through the form movement by movement. He would repeat a movement several times as the class copied his movements, then he would ask each person - one at a time - to lead the group through what we had studied so far. It was an effective way of teaching. You had to really try to memorize it because you were going to lead the group at any time. Occasionally, he would say, "from beginning," and we would all start back at the beginning. He didn't need great language skills because he repeated the movements and coached us on the proper way of opening the fan, proper footwork, stances, and if you knew what to look for, you could see the other body mechanics and silk-reeling movement that we work so hard to do well.

He didn't get through the entire fan form in 2 hours, so Kim and Chris arranged their own private lesson this afternoon where they'll try to finish the form with him. Then we'll all work on it next week at our practice sessions.

Private lessons with Chen Ziqiang are still quite a bargain (a lot less than his father charges but I'm sure that will change as he becomes more well known). From 8:00 to 9:00 he worked with me on Xinjia Yilu, correcting posture, working on movements and answering some of my questions about some movements.

He doesn't speak much English, and the only complete phrase I know in Mandarin is "My Mandarin is not very good." When I said it in Mandarin, he laughed and said, "My English...not good."

But the private lessons are effective because you get to watch his body mechanics up close and personal, and he makes corrections in your movement and posture. You can't cover a lot in an hour, but each baby step takes you a little farther down the road, right?

Chen Ziqiang had the reputation for a while of being too rough -- he often injured his training partners. I was told that his mentors in the Chen family had talks with him to get him to not be as rough with the foreigners. I found him to be a somewhat shy but very nice man, and a good and patient teacher. I didn't know what to expect, but he laughed often and it was a very pleasant and challenging training opportunity.

Last November first, I didn't have the strength to walk, I had lost so much muscle lying in a hospital bed for two weeks. Workshops with members of the Chen family are notoriously demanding -- the body mechanics of high-quality tai chi will turn your legs to jelly. Just to make it through three hard hours of training with him was amazing. He works hard and only takes occasional 1-minute breaks. It appeared effortless to him, of course. The breaks are for the American students. :)

Anyone studying tai chi should take advantage of the opportunity we have when members of the Chen family come to the U.S. Until you train with people at this level, it's very easy to live in a bubble. Seeing real tai chi is a humbling experience. I was first introduced to members of the Chen family by Jim and Angela Criscimagna, who hosted several great workshops when they lived in Rockford, Illinois. They changed the way I look at martial arts.

This is a video of Chen Ziqiang working on push hands with students in the Chen Village. He's the one in the light-colored sweatshirt. Chen Bing, his cousin, is doing the talking. This is the Chen family's world. The rest of us are just living in it.