What Does a Black Belt Mean? 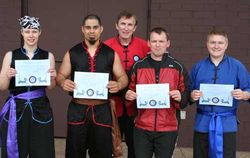 Like a lot of people, I used to think that if you had a black belt in a martial art, you were capable of killing people with your bare hands, a walking lethal weapon. It was a world shrouded in secrecy and mystery.

When I earned a black sash in 1997 and started teaching, I realized the holes that I still needed to fill in my knowledge and experience -- holes the size of the Grand Canyon. So I continued to study, learn, and through the miracle of videotape, I could watch my tournament performances and cringe at the improvements I needed to make in my own body mechanics and form.

I was only beginning to study.

Now, I've been teaching for 12 1/2 years and only two students have achieved a black sash. Yesterday, Chris Miller went through the test -- drilled through the basics of Hsing-I Chuan, Chen Tai Chi, Baguazhang, plus sparring in all three arts, sparring with straight sword, staff, broadsword and elk horn knives, plus chin-na, push hands, fighting applications -- all the material between white sash and black.

It was an emotional moment for me when I awarded Chris the certificate. He joins me and Rich Coulter in strapping on a black sash in our particular system.

Chris has worked for nearly 4 and a half years, living, eating and sleeping kung-fu. He has shown creativity and skill. His achievement shows persistence and determination that very few people have shown over the past decade or so. It's truly an achievement to be proud of, and no one can take it away.

And now the real study begins.

When I look back at my performances when I first got my black sash, they don't compare to my performance now. My body mechanics have improved, I've learned more about the arts that I practice. I ditched one art (Yang tai chi) and adopted Chen tai chi as my foundational art. After more than 12 years, I know even more clearly what I need to improve, and I just hope I have the time to work on it over the next few decades. I feel as if I've just started.

The beauty of the internal arts, particularly Chen tai chi, is that the deeper you get into it, the deeper it becomes. You can never feel that you've arrived, because every step forward reveals another path ahead that you must travel through hard work, sweat, study and reflection.

Purists in tai chi would scoff at the awarding of sashes, but in the mainstream world of martial arts in America, students want and need the levels that allow them to set and achieve goals. That's fine, as long as students and teachers understand what it means to achieve a black sash.

When you go to college and earn a BA degree, you graduate without a lot of experience and knowledge that you will gain in the "real world." When I graduated with a degree in journalism and broadcasting in 1975, I wasn't very good. I thought I was. All the graduates think they know what they're doing. What I had, however, was not skill but potential. Over the next 10 to 20 years, I built my skill and was very good by the time I left the business. But it was the knowledge and skills I gained "on the street" that made me good, not the degree. It only prepared me to learn.

And that's what a black sash or black belt means. You are now ready to learn. Now, the real study begins. The basics are understood. During the coming years, you'll be able to look back at video and if you work hard, you'll see the improvement as each step reveals more understanding of movement, of energy, and how to use it all.

Some people earn a black sash and then stop. After a while, that doesn't mean very much. They earned it, but in stopping, it's like earning a BA in computer programming and going to work serving fries at McDonald's.

Yesterday was a very important day for me. The people who tested hung in when we closed our school and Nancy and I moved to Tampa for a new job. They hung in after we moved back and I got very sick last year. In November, I wasn't sure I'd be able to return, but they hung in as I clawed my way back, and that made yesterday an achievement for all of us -- Colin Frye earned his purple sash, Kim Kruse earned her brown sash, and Chris Miller earned his black sash. Also pictured is Leander Mohs, who has excelled at other arts and is now working with us (receiving a white sash certificate).

As the certificates say, the student is deserving of the respect that comes from the hard work and determination that it takes to reach this level. The certificate also says its the student's responsibility to continue studying and growing in the philosophy and the martial aspects of these amazing arts.

Excellent blog! And way to go Chris and everybody once again! It's been a wonderful journey and I can't wait to see what the future brings!

Thank you all. It's been a long hard journey. Sifu is correct. This is just the beginning. It's like climbing a mountain and once you're at the top there's dozens more to explore and conquer.

I look forward to continuing on this journey. Thank you all for your support again. This is when it gets even more interesting.

Congratulations to all who were promoted! This is an important post. I think a lot of people see black belt/sash as an achievement rather than a milestone, if that makes sense.

Another way I've heard it described is that black belt/sash means that you have shown that you are capable of learning the art...you've learned all the fundamentals and basics and now can actually be taught the the real stuff. It's really the beginning of your training, not the end.

To be clear, I'm not belittling it. I have much respect, as I haven't reached the beginning of my training yet by any stretch of the imagination. :)