An Excellent Use of Kao Energy (Shoulder) in Tai Chi 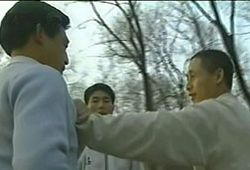 Chen Ziqiang - the son of Grandmaster Chen Xiaoxing -- was in a tai chi fight recently that was televised. Photo at left -- courtesy CCTV -- shows Chen Ziqiang (right) working with his father (left) with Chen Bing looking on in the middle.

Chen Ziqiang is one tough sonofagun. I've heard that some people even around Chen Village are afraid of him because he's so good and he can hurt someone quickly with his skill. I even heard that he had been told to go easier on Westerners because they aren't accustomed to tai chi being so rough. Too many Westerners are into tai chi for health and exercise, not as a martial art, the main reason it was created. Even Chen Bing has acknowledged that they have to train Westerners differently because they aren't able or willing to work as hard on the martial aspects as the Chinese.

So check out this video of Chen Ziqiang in this match. It's the first match on the video. He's dressed in black and white. His opponent doesn't score a point. It's an amazing use of "shoulder" energy -- Kao -- also known as "bump."

As you watch, notice how Chen Ziqiang shocks his opponent by using Kao -- just enough to set him up to be thrown to the ground. Sometimes the shock of the Kao is enough to make the opponent fall. Usually, however, it's a setup.

The way he uses it in a couple of instances is a clear example of "borrowing" energy. The opponent is coming in and Chen Ziqiang slams into him, using the opponent's energy and bouncing it back at him, putting him off-balance, or setting him up for the next unbalancing technique.

This is a thing of beauty. The match begins about 2 minutes into the video. It's real tai chi fighting. I would love to see Chen Ziqiang in an MMA match.

Thanks so much for posting the link to this video. You are right, his Kao is a thing of beauty and extremely effective the way he uses it. All in all, this was a great revelation about how to use T'ai Chi as a martial art.