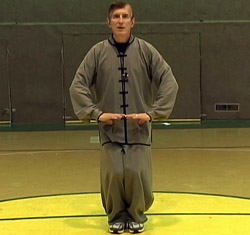 Besides capturing and controlling your opponent's center, one of the key goals of Baguazhang is to get close to the opponent and use your body to uproot them -- unbalance them -- and put them down.

As in each of the internal arts (and kung-fu in general), there are many ways of doing this that are hidden inside techniques.

The circular and flowing forms that you see provide you with a way of practicing the body mechanics you need to practice these techniques with a partner and later, use them in a self-defense situation. 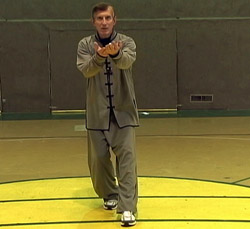 Photo 1 shows the end of the opening movement to the Cheng-style "Eight Main Palms" form. It's similar in energy to the opening of a Tai Chi or Hsing-I form -- downward energy. One obvious application is a downward block/deflection of an incoming punch.

Photo 2 shows the next move, a step-out with the left foot as both hands shoot out along the centerline with palms up. Some people may see this as simply a way to begin walking the circle in the dragon posture, but there are also fighting applications here. For one thing, after you've blocked an incoming punch, you attack the throat with spearhands. 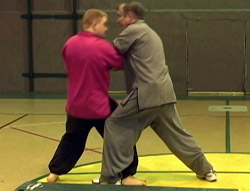 But that's too easy, isn't it? I like to dig deeper to see how the concept of uprooting the opponent can be realized. In Photo 3, after blocking an incoming punch, I'm stepping out and sealing the opponent's right leg with my left. I press into him with my arms and move into the left kua.

In Photo 4, he has nowhere to go but down.

Tai Chi and Bagua are close-up fighting arts. A good fighter using these arts wants to get close to the 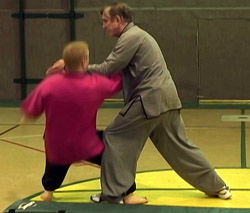 opponent, break them quickly and leave them on the ground. This particular technique doesn't break the opponent, but the fall itself can do damage or at least take a little bit of the fight out of someone without doing a lot of damage. From a psychological standpoint, taking someone's ground and doing a takedown is pretty damaging. From a philosophical standpoint, I would rather knock someone down without breaking them if that will end a fight without injury. But sometimes an opponent will only get angrier, and that's why you learn other techniques.

As you practice the internal arts, look beneath the surface of movements to see how they can be used to get close and uproot someone with your body.

All of my DVDs and many of the video lessons on the online school delve into the body mechanics and fighting applications of movements. My thanks to Colin Frye, who is the student in the photos.