Home Archives Profile Subscribe
Many Similarities Exist in Applications of Hsing-I, Tai Chi and Bagua
The Controversy of Falun Gong and its Repression in China

The Power of Closing in Tai Chi, Hsing-I and Bagua 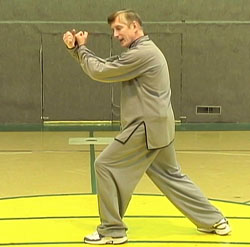 The body mechanics of the internal arts -- tai chi, hsing-i and bagua -- involve opening and closing in all movements. This week, as I work with students on fighting applications from the Hsing-I intermediate form Ba Shih, we're working on body mechanics that apply across all three arts. One of the movements incorporates a powerful closing action, and it shows how devastating this can be in a self-defense situation.

In tai chi, this movement is done in the commencement when you lower your hands. The application isn't always apparent to the naked eye. In the Hsing-I form, internal strength flows up from the ground through the body as you roll the hands forward (Top Photo). 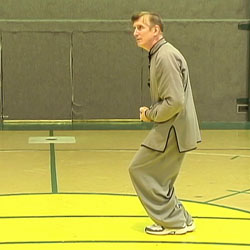 The second photo shows the closing. You close the body as you pull the hands down to dan t'ien level. This is done very powerfully but without a lot of muscular tightness -- with relaxed strength and speed. Notice I'm not bending over when I pull down -- that's a mistake a lot of beginners make. Keep the hips underneath you and not sticking out when you close,.

In the third photo, one of the applications of this movement 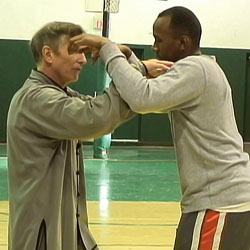 begins. My opponent comes in with a push or a grab with both hands. I deflect the push by raising the hands up and forward. I grab his forearms.

In the last photo, the closing happens and pulls the opponent down. You can easily snap your opponent's neck back and cause whiplash so be careful when practicing. James, my partner in the photo, is a U.S. Marine recruiter and much bigger and stronger than I, but I was able to surprise him with a pulldown here.

There are so many movements that incorporate "down" energy and fa-jing, pulling and closing. Think of the hands sweeping downward at the beginning of Six Sealings, Four 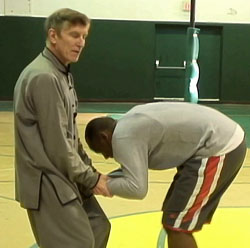 Closings in Chen Tai Chi. Think of this type of closing when running through movements in all three of the internal arts.

In the bottom photo, other movements are implied. For example, you could drive a knee up into your opponent's face. You could also follow up with an elbow strike to the side of the head or a downward elbow to the spine. The counters are only limited to your imagination.

The videos for these practice sessions are on the online school for members now, and eventually will be on my next Hsing-I DVD.