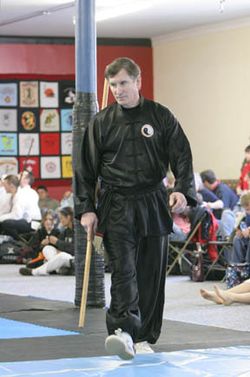 22 years ago I stood in Sifu Phillip Starr's kung-fu school in Omaha as a black sash student (black belt) -- Bob -- was asked what a particular movement meant for self-defense. I was not a black sash at the time. Bob was a friendly person and was very helpful to lower-ranking students. When asked what a movement meant, he would demonstrate three or four powerful techniques that were hidden in the movement -- it wasn't just a block, for example, it was also an arm lock and a takedown.

I was amazed at the depth of his knowledge. How did he become so good that he could see so deeply into these flowery kung-fu movements?

The years passed and I continued to study. Sometimes, I would begin learning a long series of movements known as a "form" (often called "kata"). These forms could include up to 100 movements and take 12 or 13 minutes to perform. Each time I would begin on the first movement, it seemed that I would never get to the end.

But one step at a time -- one movement at a time -- suddenly the end of the form arrived and I had learned a new one.

A couple of years ago, I released a series of DVDs on tai chi fighting applications, looking deeper than any videos have ever gone into the self-defense techniques hidden in a tai chi form.

Now, students were wondering how I learned all that; how I got to the point that I could see so deeply into the art.

The answer is simple -- persistence.

Woody Allen once said that 90% of success is just showing up. It might be a little more complicated than that, but he was on target. The most important skill you can have is the ability to persist until you meet your goals.

Set a goal and don't let anything stop you from getting there. Just take it one step at a time. Work at it and don't quit. Before you know it, you will have achieved something great.

Look at any Olympic athlete -- someone like Lindsey Vonn. Consider the hard work it took her to become a gold medalist. Consider the injuries she overcame, the crashes, and even the week that she won the gold she was enduring an intensely painful shin bruise.

She could have given up but she persisted all along the way and she achieved her dreams.

When I was growing up, my favorite baseball player was Pete Rose. I watched him play many times in Cincinnati, and I was there the night he broke Ty Cobb's record for hits. Pete was not the most gifted athlete. He wasn't the biggest, the fastest, or the strongest. But he was determined to be the best. He practiced hitting after others had gone home. He got to the ballpark early to practice. When he was walked, he ran to first base. They called him "Charlie Hustle." He didn't just slide into a base, either. Pete Rose slid head-first with his arms outstretched like Superman.

Pete Rose is the embodiment of persistence. He didn't need the most talent. He showed up, had a goal, and gave it everything he had.

In the dozen or so years since I began teaching kung-fu, many students have joined my classes. Only one has made it to black sash and one more will make it during the coming year. Most students see that it's a difficult road and they drop out. Others really love it but let other things in life get in the way. Only a very few have the persistence to make it to black sash. And then they learn that they've only just begun. The real learning comes after they reach black sash.

Even in the Chen Village, the birthplace of Tai Chi, Master Chen Bing says that among the Chinese students who study the art, only one in 100 persist long enough to achieve real skill.

Remember the old joke -- how do you eat an elephant? The answer -- one bite at a time. It may be a joke, but the message is clear. Persistence is the most important skill for success in life or in the martial arts.

In April, 2008, I was told I had a heart problem. Too many rogue electrical pathways were causing my heart to beat like a drummer playing "Wipeout." A week later, I lost my job. Budget cuts, they said. I went home and told my wonderful wife, Nancy, that I was tired of working for people I couldn't trust. I wanted to launch an online kung-fu school.

I started with nothing -- reserved the domain name, planned what I would want if I were studying online, and I began videotaping lessons. People raised their eyebrows when I told them what I was doing. "How can that work?" they often asked. I didn't let that stop me. Most teachers have a school or rent a space. I had a school a few years ago and wasn't real happy with the experience. This time, I had a vision -- I had been asked a few times over the years how someone could study if there were no teachers around. My idea -- I would offer what I know to people around the world who need it, and help them study in their own homes.

Three months later, the online school was launched. That was almost two years ago. I now have nearly 400 video lessons on the site, plus e-books and other material, and I have members around the world who pay a monthly fee to study online. I'm not even close to being finished. There may be over 1,000 video lessons before the site is where I want it to be. But every morning when I wake up, someone around the world has sent me money for their membership or to purchase a DVD -- from the U.S. to Japan, from England to Slovenia. I've never felt so good about any job I've ever had.

Yesterday, I received an email from a student of a well-known tai chi book author. This student told me that he had purchased some of my DVDs and I had "filled in a lot of gaps" and had given him "a lot to practice." I wanted to frame the email. From the videotaping to the editing, to DVD production, marketing, putting together ads and writing blogs and articles, this is a one-man production (with occasional videography from Nancy and my local students). It's a totally creative experience and it enables me to use every skill I developed in radio and TV news and PR/media relations.

I have a dream -- a goal -- and I am persisting one lesson at a time. I'm also studying and learning new material to advance my skills so that I can pass it along to my students. All this has been accomplished despite setbacks that would have sidelined a lot of people -- three heart procedures and the loss of the function of my left lung all within the last 18 months, and a couple of near-death experiences in the hospital less than 4 months ago.

Despite this, I'm practicing with students again and have hit a very productive sweet spot. I'm about to finish my newest DVD -- an instructional DVD focusing on the intermediate Hsing-I form "Ba Shih." All the video for the DVD is already on the website in bite-sized chunks.

Woody Allen was right. I show up every day and work on my goal. Just like learning a long kung-fu form or eating an elephant, I knock out one lesson at a time. It grows and grows.

It doesn't matter if your goal is work-related, family-related, financial or success-related. Set the goal, map out the actions it will take to get there, and persist. Don't let anyone or anything tell you that you can't do it. Don't let anything stop you from taking one step at a time.

If you do this, you can achieve anything -- even a gold medal, a black sash, or Ty Cobb's record for all-time hits.