Learning the Internal Arts Online - the Beauty of Video Coaching 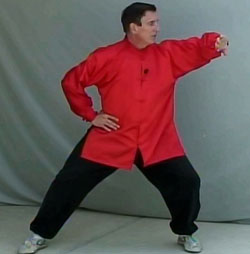 Another member of my online internal arts school opted for personal coaching last week. He shot some video demonstrating a couple of silk-reeling movements and standing stake. In a move that I thought was very creative, he put the video clips on Facebook so that only I could see them.

I watched the video clips -- each one was between 3 and 5 minutes long -- and was able to make comments right there on his Facebook page.

Whether we are enrolled in a regular school or the online school, most of us make the same mistakes when we're beginning. The most important thing for the student is to have a teacher who can identify errors and clearly explain them.

I shot a reply video for this person, showing him how he was turning his hips too much, and other tips just for him. Turning the hips is one of the most common mistakes people make early in their training. It's very hard for people to separate their waist/dan t'ien area and the hips. When you tell people to turn the waist, too often they turn the hips and it throws their posture all off.

Another common mistake in silk-reeling is the "dead spiral." You'll put your hand in a position and move it across without spiraling it. He was doing this, too, along with performing at too fast a speed. You really need to slow silk-reeling down and feel the spiraling through the body -- feel the connection with the ground, peng, and whole-body movement as you spiral from the ground to the hand. These are skills you need for any internal art, whether it's Chen tai chi, Hsing-I Chuan or Baguazhang.

Another common mistake is with the elbow. The elbow should not be higher than the hand, especially when spiraling the hand across the front, as in single-hand reeling.

I posted my coaching video to a private page on the web. I sent him the link. His reply was "Wow!" He said the video really made him see what he was doing wrong. He's going to practice a little and then shoot another video for coaching.

There are a lot of folks out there who don't understand how technology has improved. They say "you can't learn this art through the Internet."  I believe you can, and for a lot of people who don't have access to good teachers, it's a great option. When I work with people and see them inspired, and see them take steps forward, it's a great feeling.

I totally agree that you can learn from video materials and through the internet, especially with feedback going back and forth like you've got thing arranged. People say a lot of negative things (about everything) but if they were to think it through they'd realise there isn't much difference between learning from a virtual teacher and a real one. There are pros as well as cons too - like being able to watch a film clip as many times as you like and even slow it down to frame by frame. I've learned to refine my movements further by watching my own video footage.

... of course they'll also need someone to practice applications on...

What Sifu Gullette is doing is making possible what used to be unthinkable. He is serving as a pioneer in this modality of martial arts training. I wish I would have stumbled upon his website on day one--but I am so fortunate to have found it at all and be learning so much of value in such a convenient and accessible manner. I was hooked on American Tao within days! What I would say to some of the critics of online martial arts training is this--at a typical martial arts school, there may be 10 or 20 other individuals for the instructor to attend to. I could spend the entire class practicing something wrong or needing help before the instructor could attend to me. When I log onto American Tao, it is as though I am receiving one-on-one private instruction 100% of the time. When Sifu demonstrates a posture, he is doing it just for me as I follow along. Whenever he corrects a mistake on a fellow student in a video, it serves as equally good advice for me to follow. When he shows a martial application, I am right there to see it and practice it for myself (even if it is only in a shadow-boxing experiment). This is profoundly quality learning! --Michael

Michael, I really appreciate this comment. It is very gratifying to know that what I'm trying to do is helping you. Thank you.