It was 36 Years Ago Today

I took my first martial arts class 36 years ago today. Bruce Lee had set the country on fire. My cousin, Bobby was taking lessons and I had been mesmerized by "Enter the Dragon" that summer. When I started back to school in September, a junior at Eastern Kentucky University and 20 years old, I talked to him about it a lot and decided to take the plunge. The photo at left was taken a few months later, in 1974.

My first teacher was Grandmaster Sin The (photo below), who taught Shaolin in Lexington, Kentucky. He had come from Indonesia to study at the University of Kentucky and even though he got a degree in engineering, he made a great living as one of the first martial arts teachers in Lexington.

I went to his school for a beginner's class 36 years ago this evening. His school was 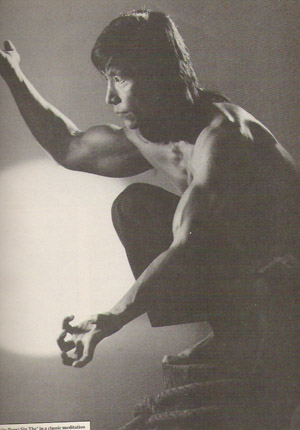 in a strip shopping center, in what had been a garage, and there were so many new students that night, he had to open the garage door and the class spilled outside. I was standing outside. Grandmaster The (pronounced "tay") showed us some punches and kicks and led us through a couple of very basic techniques.

I didn't realize it that evening, but the martial arts, and kung fu, were going to be a centerpiece of my life from that moment forward. In fact, my wife Nancy says kung-fu is "part of who you are." For many years, it was a hobby. In 1997, I began teaching and it became a fierce passion and a part-time business. After losing my job over a year ago, I decided to make it a full-time job and I launched the online school. I have 16 DVDs on the market with plans for many more. And even though I'm also doing PR, marketing, and video work on the side, the internal Chinese arts of kung-fu are the center focus of my career at this point.

When I was a beginning student, and they said you should practice an hour a day, I took it to heart and you could see me practicing my basic punches and kicks up and down my dormitory's hallway (7th floor) at least an hour every day -- the same kicks and punches. Many years later, when I started studying the internal arts with Sifu Phillip Starr in Omaha, I practiced the fist postures of Hsing-I and all the forms he taught us in Hsing-I, Tai Chi and Bagua at least an hour a day at home -- plus I attended classes sometimes up to 4 times a week. After moving from Omaha to Sioux City, 90 or so miles away, I drove twice a week to study kung-fu and acupuncture with Sifu Starr.

One of the frustrations I had when Nancy and I owned our own school (we closed it in 2007) was when it was obvious that some students weren't practicing between classes. They should be practicing every technique every day, up to an hour or more a day. That's when you know someone is really serious. I'm lucky right now to have some students--a small core group here in the Quad Cities--who have that kind of passion. I don't miss having a school.