Key Internal Arts Skills -- the Dan T'ien and the Kua 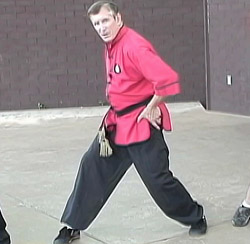 Grandmaster Chen Xiaowang says tai chi is made up of "One principle and three techniques."

The first principle is "when one part moves all parts move, and dan t'ien guides all movement."

The first technique is the dan t'ien rotating over the top and backward in the same direction.

The second technique is the dan t'ien rotating sideways.

The third technique is the dan t'ien rotating in a combination of the two directions.

Learning to rotate the dan t'ien is one of the crucial skills of the internal arts. No movement can be done without dan t'ien rotation. Often, when you're told "turn the waist" the real meaning is to turn the dan t'ien. 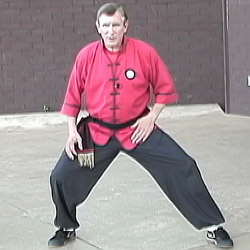 In the first photo, I'm demonstrating the incorrect position most martial artists I've met (even internal artists who are unfamiliar with Chen style) do when they "turn their waist." As you can see, the hips are turning.

Rotating the dan t'ien also makes use of the kua -- the creases at the top of the legs at the groin. In the second photo, I've closed into the right kua. In the third photo I've placed my hand into the kua and I'm showing some students how to feel their dan t'ien closing into the hand -- thus, closing into the kua. This is something you don't want to overdo -- I closed into the kua once in front of Chen Xiaowang and he scolded me, "Too much." I was practicing the punch in Laojia Yilu, and moved into the kua before the punch. After he said, "too much," I eased off of it a little. "Too much," he said again. So I eased off a little more -- I still went into the kua but not as deeply. "Ahh," he said. "Just right." 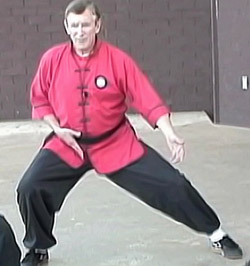 In the free 10-part video series that I offer to visitors of my online school, I explore some of the key body mechanics needed for the internal arts -- Hsing-I, Tai Chi, and Bagua. I the lessons on the school, we go into a lot more detail, but if your teacher hasn't explored with you some of these concepts, it's about time you saw them in action. I encourage you to check out the 10-part course if you haven't already. You can sign up for it below.

The internal arts are complex but they aren't mystical. They're based on physical skills. Even though it can take a lifetime to master these skills, you aren't even doing the internal arts if you haven't at least been taught the basics. Once you learn the concepts, you take it one baby step at a time and try to get better. Even if you believe you know the score, I urge you to check out the free course.

Where is this lesson on the website? Is it on the Chen 38 DVD (I have it, but I haven't gottent through all of it yet). This particular lesson is one that I definitely want to see!

There's a video I put in the Internal Strength section last winter on dan t'ien rotation. I'm sure I talk about the kua there, but I talk about that in a lot of the silk-reeling videos. I'll put this 10-part series on the site soon for newbies and call it something like "Start Here." :)