I met a guy who had been into tai chi -- Yang style -- for 20 years. We compared notes and he showed me some silk-reeling movements. It was obvious that he wasn't connected through the body, and he wasn't using whole-body movement.

I stepped over to him and asked him to step behind me and get up close, as if he was going to knock me over his leg. He put his right leg behind my left leg and his torso against mine.

"Now knock me over," I said. He stood there, uncertain what to do.

He turned his waist but not his arms or upper body. I didn't go anywhere.

"Turn the arms and upper body with the waist," I said. He thought about it for a second, then turned. I almost went down.

"Now, when you turn it all at the same time," I said, "move down and into your right kua as you turn." I pointed to the kua as I said this so he would know where it was.

He turned and I went down hard to the ground. "Ohh," he said, a light bulb coming on as he gained insight. 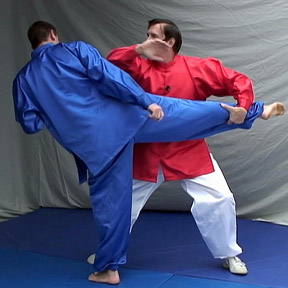 Now, how can someone practice Tai Chi for so many years but not understand whole-body movement? It happens all the time. I've had this same encounter with many people who have years of internal arts experience (I've never met a Chen Tai Chi person who had this problem, however). I'll bet their teacher has talked about whole-body movement. I'm sure they've been told to move the whole body, but either the teacher didn't know how to teach it or didn't understand it himself.

I saw the same thing when I did my Chen 38 fighting applications workshop a couple of months ago. From beginning students to high-ranking black belts in karate and even a tai chi teacher (Yang again), no one knew 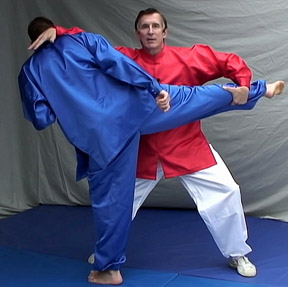 how to connect the whole body for self-defense so that they could remain relaxed and yet knock someone down. No one knew where the kua is and very few understood the difference between turning the hips and rotating the dan t'ien or waist.

develop if you want to do high-quality Tai Chi, Hsing-I or Bagua. It's a physical skill that is developed through hard work and practice. It's one of the skills included in the free 10-part video course on my online internal arts school. You can sign up at the end of this post and receive this free course by email.

Here's an example, shown in the photos here. In the top photo, Tom Revie is delivering a roundhouse kick. I block 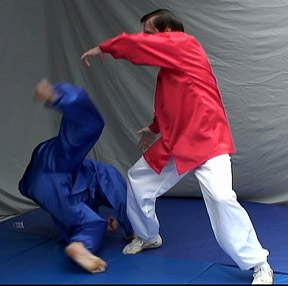 and grab the leg and put my hand on his neck in the second photo. In the third photo, I connect from the ground through the hand and turn the waist. The entire body moves -- the arms move with the waist and I move into the right kua. Tom goes to the ground easily. This is from the Tai Chi movement called "Lazy About Tying the Coat."

If you're into the internal arts--or any martial art--I encourage you to take advantage of this free video course in key internal arts body mechanics. You might learn something that can make your own arts more powerful.