Old Habits Can Be Hard to Break in Tai Chi Practice 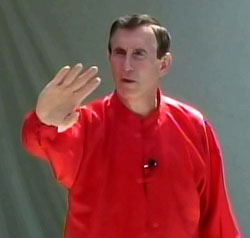 There is a cute home movie of my wife, Nancy, when she was just a couple of years old. She's walking down the steps of her home in Rock Island, her hands held up about shoulder-level, her wrists limp just like a girl, and her hands bouncing as she walks.

If we saw a home movie of a boy walking the same way, we would look at each other and our eyebrows would raise suspiciously. A limp-wristed boy? You know what THAT means.

Here in the U.S. particularly, young guys find out very quickly that we shouldn't let our wrists go limp at any time. As I grew up in the Fifties and Sixties, it became very clear that a limp-wristed guy was ridiculed as being 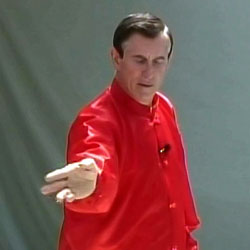 gay. The words used back then weren't as polite.

So we grow up very consciously keeping our wrists locked in place. No limp-wristed stuff going on here!

Flash forward two or three or four decades, when the guy starts to learn tai chi, and he begins to learn that proper silk-reeling movement requires him to loosen the joints and spiral the movement from the ground through the fingers. Throughout their bodies, in fact, they hold so much tension that it's difficult for them to find the right balance. 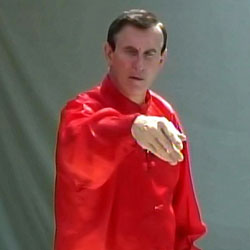 proper body alignment and the ground path/peng jin connection. Yes, it's relaxed but strong. It's NOT limp, and yet it appears relaxed.

You can't do proper tai chi if you're too limp or too tense. There is a balance that's often referred to in Chinese as "song," a relaxed state of readiness.

Walk up to even some tai chi students who have studied for a couple of years and test them as they go through a movement by pressing on an arm. Instead of feeling the ground and the expansive peng jin, the arm often collapses under the slightest press. That's not what should happen. Instead, you should feel a buoyant, relaxed strength and the ground. 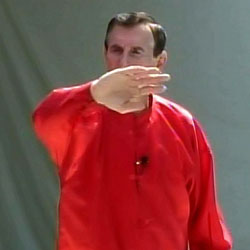 It really is possible to loosen up the wrists but still maintain strength. And it's possible, after enough practice, to see very clearly if someone is limp, too tense, or using the relaxed strength that's so crucial to the internal arts.

These photos show a silk-reeling exercise called "Small Arm Circle." The video lesson can be found on the online school or on the Silk-Reeling DVD. You're spiraling the arm, but the movement begins with the ground, moves through the body, guided by the dan t'ien and expressed in the hand. The wrist is flexible and the arm is moving like a whip that's being cracked--at least that's what the movement reminds me of.


Every time I begin teaching a new student, particularly men, I have to remind them that the old taboo about loosening up the wrists has to be overcome. It doesn't come easy, but with enough silk-reeling practice, even the most macho of guys understands the importance of this concept.